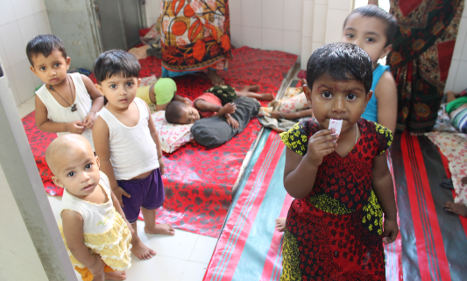 Children at a kindergarten in Dhaka. Photo: TT
The organization, which monitors Swedish companies operating in developing countries, has produced a new report criticizing eighteen brands for failing to pay enough attention to textile workers' children.
Swedwatch argues that while wages appear to be going up for factory workers, the lack of social security schemes for staff, long working hours and few fully independent trade unions are all having an impact on their children's wellbeing.
Researchers visited children in factory preschools and in their homes, with many living in slums around Bangladesh.
"We saw unclean water, open sewers everywhere. Many of the kids we met had almost chronic conditions and they didn't have enough money to buy proper food," the report's author Henrik Fröjmark told news agency TT.
He said that factory kindergartens he had visited lacked proper furniture and had few toys. Most workers he spoke to said that they could not afford to take their children to see a doctor if they got sick.
"All of the companies say they are taking responsibility for this situation, but none of them has made a systematic effort to get to grips with the problem," he said.
A long list of Swedish companies have production facilities in Bangladesh, where they have access to one of the world's cheapest labour markets.
"Ikea is the only company that has made home visits to workers to examine their needs," said Henrik Fröjmark.
The report recommends that companies take more responsibility for children born to their employees, for example by offering health insurance or helping workers to set up food cooperatives to save money on meals.
Fröjmark said it was "positive" that all Swedish businesses surveyed for the report did recognize that the wellbeing of staff and their families was part of their remit.
Lindex says it is already working to improve conditions for children. It has set up a school outside the Bangladeshi capital Dhaka, where it pays teachers salaries.
"But without a doubt we can become even stronger and better able to take the child's perspective on these issues to make a difference for children in Bangladesh," Kaisa Lyckdal, Press Officer at Lindex told TT.
Per-Johan Swartling, administrative manager at Gina Tricot, said that Bangladesh was a priority country for the company when it came to protecting children's rights.
"Together with Unicef and local stakeholders, we operate 150 kindergartens in Dhaka's slums," he wrote in an email to TT.
"We spend over 20 million kronor [2.8 million] on this particular project."
Ikea could not immediately be reached for comment.