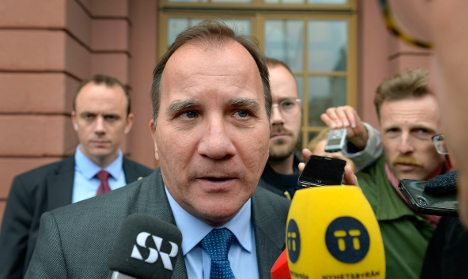 Social Democrat leader Stefan Löfven. Photo: TT
September 29th: Parliament gathers to select a new Speaker.
September 30th: The first chance for Parliament's Speaker to propose a new Prime Minister. This will be Stefan Löfven, leader of the Social Democrat Party, who has announced a formal coalition with the Greens.
October 2nd: Parliament votes for the proposed Prime Minister.
October 3rd: Assuming Parliament votes in Stefan Löfven, he can then announce his top team of ministers. He will hold his first cabinet meeting at the Royal Palace. His team will also be working on their future budget, which must be passed in order for them to remain in government.
November 17th: The final day the new government can put forward its budget. If Parliament votes against the budget, then the coalition government will not be allowed to stay in power.
The leaders of the centre-right parties that made up the outgoing government Alliance have already said they're prepared to put forward a budget of their own, as have the Sweden Democrats. So watch this space.
2015: If the Social Democrat-led government cannot pass a budget, there may even be re-election. This would have to be held within three months of any failed budget vote.
Elections 2014: Most memorable moments