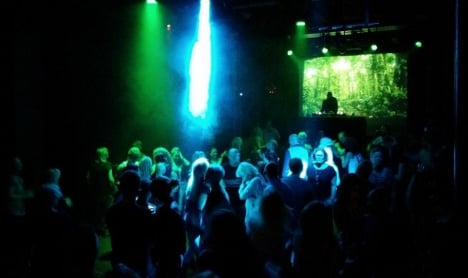 Around 900 people turned up for the launch. Photo: Södra Theatre

Champagne ice buckets lined the bar, while hipster staff shook brightly-coloured cocktails above their heads. One worker was sipping a beer at the same time. But there was no chance of getting in trouble for drinking on duty. All beverages were non-alcoholic.

Non alcoholic champers in full flow at #Sweden's first alcohol-free club night #Sober. Not many dancers yet though! pic.twitter.com/NwLOSNVCEE

Outside, excited clubbers queued patiently along the cobbled street, before being ordered to blow into a breathalyser to check that they hadn't been on the booze earlier in the evening. Specially trained staff also kept an eye out for people who might have taken drugs instead. Only a few ticketholders got turned away from the event, which sold out weeks in advance.
Once safely indoors, guests moved between a room offering house and techno from US Grammy and BRIT Award nominated Zoo Brazil, to another playing commercial classics from Snap's 90's anthem Rhythm is a Dancer, to Stayin' Alive by the Bee Gees.

All guests had to prove they hadn't already been drinking

By 11pm, the venue was rammed, with few seeing the need for a traditional pre-club gathering at home or in a bar if the aim of the night wasn't to get tipsy.

"Things have definitely got going earlier than I expected, " said one clubber.

He told The Local he had picked the venue for his Friday night out so he wasn't hungover at a friend's 40th birthday party on Saturday.

But how did he feel making shapes on the dancefloor without alcohol in his hand?

"Actually it's not that different, you get used to it," he added.

Read The Local's interview with the man behind Sober

The crowd was much more diverse than you get at most European club nights, with curious teenagers joining former alcoholics in their fifties, clean-living yogis and breastfeeding mothers in their thirties.

For some of Stockholm's increasingly multiethnic population, this was their first time clubbing.

"I never drink alcohol. I am a Muslim and I can't usually go anywhere like this, but I heard about this new club and I talked to my wife and we decided to try," said Faisal Mohammed.

Clubbers in the techno room at 10.15pm

Not everyone was enjoying themselves though, with some clubbers complaining that they felt less confident on the dancefloor, without an alcoholic drink.

"People don't usually dance when they are sober, so it is like an awkward social experiment," added his friend Maximillian, who admitted that he hadn't chatted up any girls so far.

"A lot of guys here in Sweden are kind of shy when they are not drinking," confirmed Hampus.

He said he had no plans to return to the club, which is set to become a monthly event in the Swedish capital.

Hampus (left) and Maximillian, both 20, weren't sure if they would come back to the next booze-free event

But organiser Mårten Andersson told The Local he felt that many Swedes were "fed up" with the country's reputation for drinking and said he already had plans to take his clubbing concept to other Swedish and European cities.

"Yes there are some Swedes who are just getting more and more hammered at weekends, but there is also a second group of people who care about their health, who go to the gym and who think about what they eat. So to think about the way we drink is kind of natural to those people."

"I am not saying stop drinking, I am just saying maybe you don't have to drink every time you go out," he said.

"If you look inside, you can see there are a lot of people who agree".