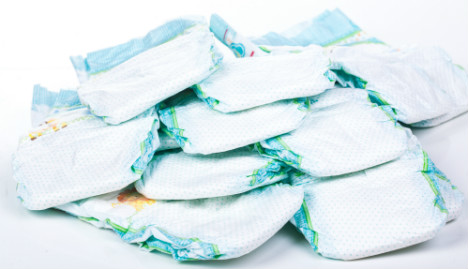 The pair, who are believed to be in their 20s and 40s respectively, were stopped in Jämtland by officers. When the cops checked inside the foreign registered van they found that it was loaded to the brim with nappies bought in Norway – 25, 179 to be precise.

Both were arrested on suspicion of smuggling offences and taken to the police station in Östersund for questioning. The alleged smugglers are both residents of Lithuania, and were believed to be en route to a location in eastern Europe with the nappy haul.

"They did not report that they were transporting the goods across the border from Norway to Sweden. You are accountable to report it to customs and pay the duty fee," Stefan Fredriksson of the Jämtland police told the Expressen newspaper.

He added that officers were up all night counting the nappies, also known as diapers, so that they had the accurate figure.

While Norway is regarded as one of the most expensive countries to live in, the price of nappies is rather cheap. Expressen reported that a single nappy can cost around 50 öre ($69 cents) but would fetch as much as four Swedish kronor in Poland.

Police have reported in the past that the Norwegian nappy trade is big business for smugglers due to the price difference in eastern Europe. Several raids have been carried out in the last year alone.

Officers said that the two men had bought the nappies in different stores in Norway so as not to arouse suspicion. A spokesperson for the Jämtland police said that two men gave the impression that the whole operation was "very well organized" during questioning.

The smuggled nappies are now being held in police storage alongside weapons and drugs.