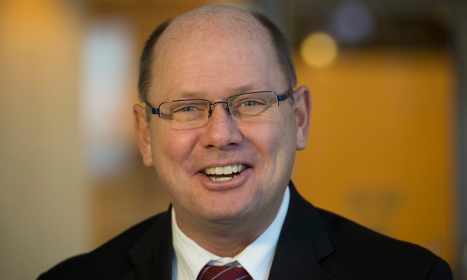 Urban Ahlin is set to become Sweden's new Speaker in Parliament. Photo: TT
Urban Ahlin, a Member of Parliament since 1994, is expected to take over from Per Westerberg, who is the current speaker.
The role involves chairing debates in Sweden's parliament and is one of the most coveted jobs in politics.
Ahlin was a surprise choice for the job, with Susanne Eberstein tipped by both political analysts and betting agencies in Sweden as the favourite for the job.
She is a former lawyer who has earned a reputation for trying to stop leaks from major police investigations. She is also well known in Sweden because her daughter Anna Eberstein has a child with the Hollywood actor Hugh Grant.
Women set to dominate top post-election jobs
Urban Ahlin is currently deputy chairman of Sweden's foreign affairs committee and foreign policy spokesman for the Social Democrats and many had speculated that he would take over from Carl Bildt as Sweden's next foreign minister.
Social Democrat party leader Stefan Löfven told news agency TT that it was not a difficult decision selecting Ahlin as his preferred choice although there had been "many good candidates."
"He has a wealth of experience," said Löfven.
"He has served on the foreign affairs committee, and it is on this committee that there is most need to collect various parties' views across bloc boundaries. And he has international contacts," added Löfven.
What's next on Sweden's political stage?