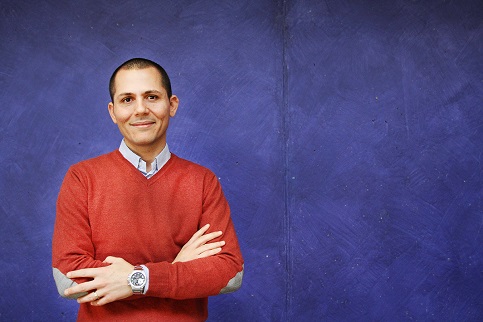 Ziad El-Awad was 34 years old when he came to Sweden on scholarship from the Swedish Institute.
"Never in my entire life had I dreamed that I would reach this side of the world," Ziad says.
Already well-rounded, Ziad had studied in Jordan, Beirut, the US, and the UK, and was armed with multiple degrees and plenty of work experience. After working with advertising he decided to join his family's export firm, and he grew accustomed to working 16 hours a day.
"It was a tough job to keep my connections with all my clients, connections, suppliers, and also manage my firm," Ziad recalls.
"We had partnerships in China, Italy, Vietnam, Spain, and other areas. We had offices there and have been exporting products from those countries all across the Middle East."
But he didn't stop there.
"I saw this opportunity in Sweden, where I would be exposed to this amazing programme, a Masters of Science in entrepreneurship."
Read also: Galyna's story – "I miss fika"
When Ziad discovered the Masters Degree in Entrepreneurship at the Lund University School of Economics and Management, he knew instantly that it was meant for him.
"I could see the links within the programme itself and how I could really utilise this to enhance my opportunities."
So Ziad took the leap. He bravely left the family firm – and his wife and daughter in Jordan – to embark upon a once-in-a-lifetime journey as an NFGL member.
"It was incredibly challenging. At first it was too emotional, it was such a huge risk."
And one of the hardest parts was getting used to the language, he says. He was accustomed to studies in England and at the American University of Beirut, where English was the primary language.
"But although Swedes speak English very well, it's still clear that it is not an English-speaking country," Ziad explains.
But Ziad was not discouraged.
"I could see that this area of research was really emerging, and there is a lot happening right now," he says. He noticed that entrepreneurship was booming – but particularly his area of interest, entrepreneurship within the food industry.
"There are a lot of initiatives happening relating to the food industry, and I really wanted to take part of it and be a part of the change that is happening in Sweden," Ziad says.
"And I knew that starting in Sweden, from an academic institution such as Lund, would give me credibility in the market and the necessary know-how about the Swedish people and how they do business."
Ziad enjoyed and excelled in his programme, but he didn't limit himself to classes.
"I made sure not to utilise only the academic aspect of the programme, but also the connections with the industry and networking opportunities. I viewed the experience not just from a student's point of view but also as a professional," he says.
Ziad helped other students to network and make business connections. He also began attending business meetings in the region of Skåne, speaking with owners and producers of food products such as honey, apples, and meat. He made connections and formed alliances with those he met.
Research and studies evolved to goals and dreams, which became more and more concrete. And soon enough, he had a business plan. The idea for Cuisine Nordia was born.
"The plan is to try and combine items from Sweden, Denmark, Norway, and Finland, and take the kitchen from this area and export it to Jordan," Ziad says of his new startup, cofounded with a connection he made in Sweden.
Five do's and don'ts for Swedish university life
And he already has a few orders for seafood and honey.
"So far I've been testing the market through my current firm, seeing how these products perform here in the Middle East before establishing the actual company," Ziad says.
And the future looks bright.
"At the moment I am waiting for my visa to be renewed, and if everything goes well I will go back and establish this new company in Sweden where I can start exporting items."
Looking back on  his time with SI, Ziad says that networking was the most important part of his experience.
"People, people, people. It's all about people," Ziad explains.
"Swedes are really good at teamwork, and that's a very important part of what I learned. Number two, never over-amplify your own work. It is critical to learn from others even if they are younger or less experienced than you are."
Ziad recommends that new SI students take advantage of their opportunities to network – not just with each other, but with Swedes as well, although at first it may be tough.
"There is this stereotype about Swedes being reserved. But it's actually not true," Ziad says. "They're just like coconuts. They are hard to get to know, but once you do get to know them they are just as sweet as coconuts on the inside."
But most of all? Just enjoy the ride.
"You can learn so many things. Sweden is like a wide open door – and it gives you a broader perspective of the world," Ziad says. "They expect you to innovate, not just research, and they unlock all boundaries around you. So utilise each and every opportunity you get."