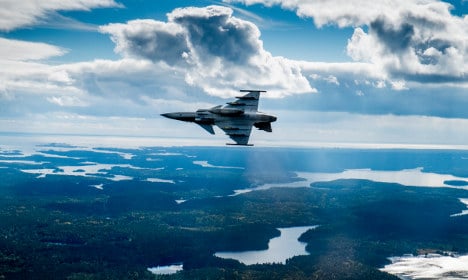 A Jas Gripen. Photo: TT
Days after incoming Prime Minister Stefan Löfven announced a coalition between his Social Democrats Party and the Greens, the new government is already busy announcing its future plans.
The Green Party (Miljöpartiet) has agreed to cooperate with the Social Democrats on fattening up Sweden's Defence Force by buying more Jas jets and submarines.
The Greens have previously argued strongly against increasing spending on Sweden's military. Social Democrat Leader Stefan Löfven and Mikael Damberg. Photo: TT
In return, the Social Democrats say they won't tighten up the work permit system for people migrating to Sweden.
Sweden currently has some of the most liberal immigration rules in the world.
Employers are able recruit from any nation, and people can move to Sweden on the basis of a job offer.
Under the new coalition this is set to continue, continuing in line with a cross-bloc agreement that the Greens made with the previous centre-right Alliance government.

Swedish trade unions have complained this system is being abused, and the Social Democrats previously talked about ensuring that more jobs go to people already in the Swedish labour market.

On Sunday, the new coalition leaders revealed they also planned to increase compulsory schooling by two years so all students are in school until the age of 18.
Elsewhere, the Greens have agreed to support the pension arrangements that were previously agreed on by the Alliance and the Social Democrats.