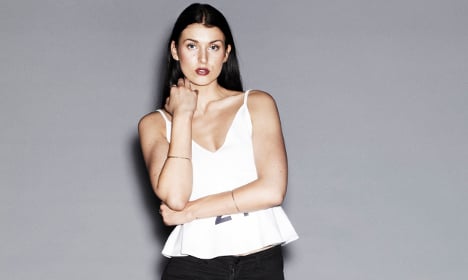 Malin Sahlén during a Top Model shoot. Photo: TV3/Nina Holma
A reporter sent messages to Brooks Newmark, 56, who resigned over the weekend after his lewd replies became public. The minister is married and a father-of-five.
The male journalist, who was freelancing for the Sunday Mirror, pretended that the account belonged to Sophie Wittams, a fictional communications officer for Newmark's ruling Conservative Party in the UK.
But he had taken the photo from 22-year-old Malin Sahlén's Instagram account. She is a Stockholm-based model who was a contestant on TV3's television show Sweden's Next Top Model this year and is also a regular fashion blogger.
There has been an intense debate raging in the UK over whether or not the freelance journalist's method was justified.
On Tuesday, Sunday Mirror editor in chief Lloyd Embley apologised for using photos of Sahlén and other women without their permission in the ‘sexting’ sting.
The newspaper did not publish pictures of the women. But the fake Twitter profile picture of Sahlén has since been published by several other leading British news sites including The Daily Mail, the Telegraph and the Huffington Post.
Embley said: “The Sunday Mirror stands by its story relating to Brooks Newmark.
"Subterfuge was used in this investigation – and we have been very clear about that from the start.
"We strongly believe there was a clear public interest because of Mr Newmark's roles as Minister for Civil Society and co-founder of Women2Win, an organisation aimed at attracting more Conservative women to parliament.
"The investigation was carried out before the Sunday Mirror's involvement. We thought that pictures used by the investigation were posed by models but we now know that some real pictures were used.
"At no point has the Sunday Mirror published any of these images but we would like to apologise to the women involved for their use in the investigation.
"We have already spoken to one of them who would like to tell us her side."
Speaking to Swedish newspaper Aftonbladet on Monday Malin Sahlén said she had not given permission for the photograph she posted online to be used.
"I am shocked and it is unpleasant for someone to use the picture without permission," she said.
Malin Sahlén was living in Sundbyberg in Stockholm until a few weeks ago, according to several of her neighbours in the suburb.
As The Local reported on Monday, she is a regular blogger and had written about the incident, describing it as a "terrible thing".
Her former landlord Håkan Askdal told The Local she was "a nice girl" and said she had never caused any problems.

Former Neighbour Sabina Hogström said she felt sorry for the model. Photo: Benoit Derrier
Another neighbour, Sabine Hogström, said Sahlén was "very kind and down to earth".
"She is working in an international industry and I hope that all this does not affect her reputation," she added.
A British woman, whose "sunbathing selfie" was used as part of the sting, also said she had not sanctioned the used of the photos.
Charlene Tyler, 26, from Lincolnshire in east England told the Daily Telegraph: "The fact that a newspaper was stealing my photograph is quite wrong. The newspaper's taken it too far."
But she added: "I think grown adults can do whatever they like as long as both of them are over the age of consent…I don't think it's something to resign over."