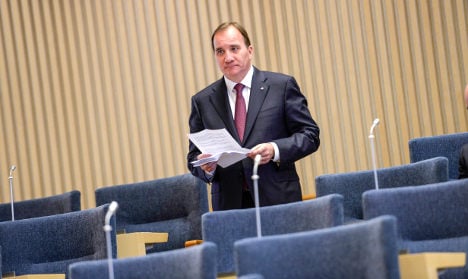 Social Democrat leader Stefan Löfven. Photo: TT
The new coalition's plans to increase welfare benefits have been confirmed to The Local by the Social Democrat Party.
The coalition also wants to scrap the current time limit on the amount of time staff are allowed to take as sick leave. It is planning an increase in research into working conditions, as part of efforts to cut stress and improve the working environment for those in healthcare jobs, especially women.
Stefan Löfven's government hopes to cut unemployment in Sweden by creating new jobs through stimulating the construction industry and expanding the country's railways, including building new high-speed train lines.
The leader of the Social Democrats has long pushed the idea that Sweden should aim to cut its unemployment rate to the lowest in the European Union by 2020.
"We need a policy to strengthen our competitiveness, if we're going to hit the job targets that we've now agreed on," Löfven told Swedish newspaper Dagens Industri.

Green Party spokespersons Åsa Romson and Gustav Fridolin. Photo: TT
The Red-Green coalition has also agreed to abolish Phase 3, the previous centre-right government's programme for the long-term unemployed.
Through this scheme, companies are paid by the state to assign tasks to those who have been out of work for several years. But the Social Democrats argue that wages for these employees are too low. The party has criticized the scheme for limiting opportunities for further study or training.
A source close to the party told The Local that the scheme "forced people into any job, with little payment" and said the new coalition wanted to offer "real wages and more structured training" for those struggling to find work after time away from the job market.

Stefan Löfven is expected to formally take over as Prime Minister in Sweden this week. Photo: TT
Stefan Löfven's Red-Green coalition has been busy since last month's election.
On Wednesday morning, Sveriges Radio reported that the government would not be shutting down any nuclear power stations in the next four years. The Greens promised to close two stations in their election manifesto.
Green Party spokesperson Gustav Fridolin told Swedish network SVT that the coalition had agreed that large Swedish companies will have to have at least 40 percent women on their boards by 2016, or face legislation forcing them to improve gender equality.
Elections 2014: Most memorable moments in pictures
Earlier the coalition announced plans to fatten up Sweden's Defence Force by buying more Jas jets and submarines, and to increase compulsory schooling by two years so all students are in school until the age of 18. A Jas Gripen jet. Photo: TT
The Greens have also agreed to support the pension arrangements that were previously agreed on by the Alliance and the Social Democrats.
Social Democrat Party leader Stefan Löfven is expected to be formally announced as Prime Minister on Thursday and to present his top team of ministers on Friday.
What's next on Sweden's political stage?