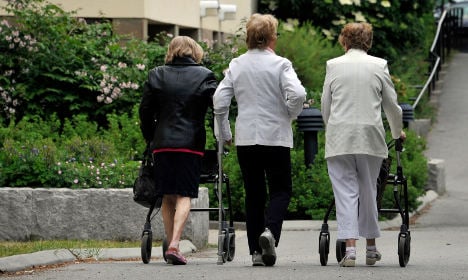 Pensioners in Sweden. Photo: TT
Norway overtook Sweden in the 2014 Global Age Watch Index to become the best country in the world in which to grow old.
The study measured nations according to the social and economic wellbeing of older people.
It reported that Sweden has 2.5 million people over the age of 60 (25.6 percent of the population) and an average life expectancy of 84.
Sweden scored third in the world on the employment and education of older people.
It also did well on measures looking at older people's social connections, physical safety and access to public transport.
The country also finished inside the top ten worldwide for income security.
Besides Japan at ninth place, the entire top ten was made up of countries in western Europe, North America and Australasia.

The United Kingdom finished just outside the top ten in 11th place, followed by Denmark at 12th.

The news was bleaker for the less developed countries around the world. The report concluded that one in three of those countries were unprepared for ageing populations.
The report predicted that by 2050, 21 percent of the world’s population will be over 60 years old.