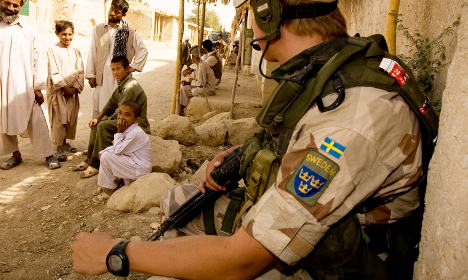 A Swedish soldier in Afghanistan. Photo: TT
The interpreters in question claim to be at risk of ill-treatment from insurgents after serving with the Swedish military.
Wednesday's judgement was welcomed by David Loveday, the British lawyer in Stockholm representing the translators.
"This is a great step for our clients. Since they first requested protection in 2012, these individuals have been left in Afghanistan without any proper, individual assessment of the risks they face, at least as far as we can ascertain," he told The Local.
"What this judgement establishes is that the Migration Board has a duty to assess the need for protection from risks that arise as a result of their service with Sweden's Armed Forces."
The seven translators are among dozens who helped Swedish troops on the ground in Afghanistan over recent years. Some of them were already granted residency in Sweden in December last year, through a closed procedure between the military and the Migration Board (Migrationsverket).
But the closed process is largely secret, said Loveday, whose company, Advokatfirman Öberg & Associés, has been representing a group of 20 interpreters.
"The Swedish authorities have so far refused to tell us the criteria they apply for deciding whether to provide residence permits under the closed procedure. It was a procedure we were not allowed to participate in. That is why we insisted that the Migration Board had to take a proper look at the applications our clients had separately submitted for residence permits, where we could submit our arguments, and had a right of appeal."
Although the majority of the 20 clients Loveday represented ended up being given permanent residence and refugee status in Sweden under the closed procedure, a number were left without any protection. The authorities gave no explanation for the difference in treatment.
Loveday added that many of the translators had sensitive tasks helping the Swedish army.
"They were in the public face – and the risk is that the Taliban or the other insurgents may consider them to have sided with the enemy and possibly with their religion," he explained.
"They fear being killed, detained, tortured, or otherwise subjected to ill-treatment because they worked for the Swedish military. The fact that most of our clients have been brought to safety here by the Swedish authorities may be thought to indicate a pervading threat."
Indeed, one of Loveday’s clients – who carried out a number of sensitive assignments while an interpreter for the Swedish military – fled to Sweden on his own earlier this year after the Swedish authorities told him they could not help him. A Swedish soldier in Afghanistan. Photo: TT
He told The Local in March that he was escaping death threats, and that a relative was even tortured by insurgents trying to find him.  Soon after arriving in Sweden, the Migration Board recognized him as a refugee because of the risks arising from his service with the military. He was given permanent residence. "His case shows that something in the closed procedure isn’t working," said Loveday.
Loveday explained that Sweden differs from many other countries that offer translators residence or protection.
In the UK, for example, translators know exactly what services are required of them to gain a new life afterwards. "Sweden's processes are far less clear," he told The Local.
The lawyer argued that when the Migration Board rejected the seven Afghan applications, it was breaching the European Convention on Human Rights.
"The Migration Board rejected our clients’ residence permit applications on the ground that they had not been handed in to the correct embassy abroad. Today’s judgment makes clear that that was not a legitimate basis on which to avoid an assessment of our clients’ protection needs."The case has made headlines in Sweden over the two-year process. Outgoing Migration Minister Tobias Billström was quick to make public statements, as well as the head of Sweden's Armed Forces Sverker Göransson, who said interpreters were a "vital part of the operation".
"This has been a high-profile case thanks to the fact that so many Swedish authorities have talked about it, but also the fact that these interpreters have done such a risky job on behalf of Sweden without protection in return," Loveday said.
"This is something that really strikes a chord with the Swedish public."