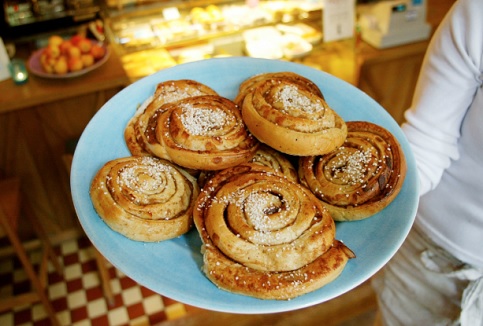 Swedes love their cinnamon buns so much they even gave the baked goods their own annual day – kanelbullens dag – everyone with a sweet-tooth something special to celebrate.

The holiday was invented in 1999 by the Home Baking Council (Hembakningsrådet), a club of baking ingredient producers now run by Danish sugar company Dansukker. The company wanted to create a baking tradition in honour of its 40th anniversary.

"So we talked with various bakers, teachers, and just all sorts of ordinary people, and we asked what bread they thought of when they thought of home-baking. And that was it."

The cinnamon bun itself has been a beloved pastry in Sweden since the 1920s. Money was tight during World War I, and it wasn't until after the war that many Swedish households could afford to splurge on the ingredients, like butter and cinnamon – not to mention the cardamom, which is one of the most expensive spices in the world. Today, most people consider Kanelbullens Dag as much of a Swedish tradition as Midsummer or the Nobel Prizes.

The buns are baked for just a few minutes in a very hot oven, making them light and fluffy with a golden brown surface. They are then topped with grains of "pearl sugar" instead of frosting or glaze.

Nowadays cinnamon rolls can be found around the world, but in Sweden they've got that extra something – a touch of Scandinavian simplicity.

"We're experts at fika," Bergström said with a laugh. "Our Swedish cinnamon rolls are simpler, more every-day, and yet tastier. They have less fat, less sugar… They're more plain, but still festive for us, and very Swedish."

Cinnamon buns are not the only food so Swedish that they are celebrated in Sweden with their very own day. Fat Tuesday is in March is celebrated with semlor, buns filled with almond paste, and Waffle Day is always March 25th.

Be sure to check out your school's international office or international club to find out of there is an event for Cinnamon Bun Day. Many universities offer the chance to teach students how.

Want to make your own? Here's the recipe!