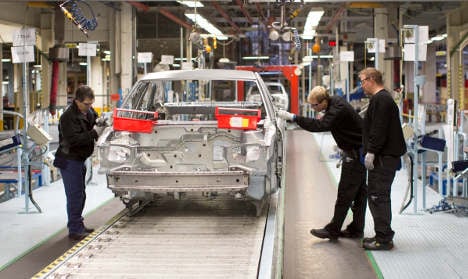 Workers at the Saab plant in Trollhättan. Photo: TT
The redundancies fell short of a previously announced figure of up to 200 employees.
Saab has been struggling to resolve serious financial difficulties by attracting new investors.
It was bought by National Electric Vehicle Sweden (Nevs), a Chinese-owned company in June 2012 after it filed for bankruptcy and hundreds of staff lost their jobs.
On Wednesday, the company reiterated a previous statement that the decision to cut further posts was “due to lack of work”.
Production at the industrial site of Trollhättan in southwestern Sweden, stopped in late May, when Nevs was unable to pay its suppliers.
The company which employed about 400 people until this week gave no information about the progress of its talks with potential new investors. But if the discussions are successful, production at the car plant could resume.
Swedish media reports have indicated that Nevs — 78-percent owned by China's National Modern Energy Holdings and 22 percent by the Chinese city of Qingdao — has been in negotiations with automakers Mahindra (India) and Dongfeng (China).
Since 2000, Saab automobile has had no connection with the defence and aeronautics firm with the same name. It only produces one model today, the electric 9-3 Aero Sedan, mainly targeting the Chinese market.