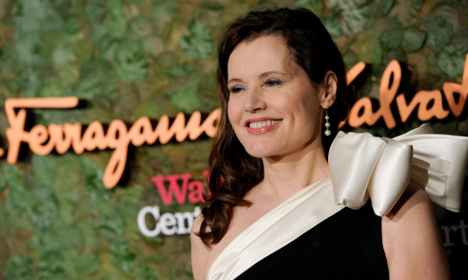 Geena Davis. Photo: AP
The Academy Award-winner, who starred as Thelma in the 1991 hit Thelma and Louise, told our blogger that Sweden still holds a special place in her  heart.
"My dream is to be in a Swedish movie," she revealed. "I still speak fluent Swedish. It went in my hard drive and just stuck there."
Davis, 58, was an exchange student in eastern Sweden's Sandviken back in 1974. She said the experience was "transformative".
"I was really struck by how much I was treated as an adult in Sweden. I had a lot more autonomy, was expected to make decisions on my own and be self-reliant. I was dropped in a foreign country, expected to do homework in a language I didn’t know. And I learned," she remembers.

Geena Davis. Photo: AP
Read The Local's full interview with Geena Davis
"My host family was wonderful and the students were so kind. It was a much less judgmental, kinder, friendlier and more collaborative environment. Even in card games, like my favourite one, Plumpa, people worked together to help each other not to win individually. It took me a while to adjust to playing cards that way."
The actress even got engaged to a Swedish guy, but it only lasted about a year.
When The Local contacted her old fiancé, Mats Dahlsköld, he remembered the relationship fondly.
"Oh, that was a very long time ago. We were only about 18 years old," he said with a chuckle.
"We don't keep in contact anymore. We haven't spoken for about 15 years, but we had a very nice time together. She's hardly changed – she was always a very open and friendly person."
Davis, however, left Sweden and Dahlsköld and headed home to US to chase Hollywood success.
She won an Oscar for Best Supporting Actress for the 1988 film The Accidental Tourist before her major breakthrough in Thelma and Louise three years later.
Most recently, Davis has bee busy with her latest role in Commander in Chief, where she plays the first female president of the US.
Now, when she's not practicing archery or acting, she works mostly with a foundation she started: The Geena Davis Institute on Gender in Media.
"I hope to dramatically increase the number of female characters, change what they're doing, and how they're thought of. There’s no excuse for even one more minute having this imbalance," she told The Local.
"It's one of the few areas we can change overnight." Davis is a former US semi-finalist on the women's Olympics archery team. Photo: AP