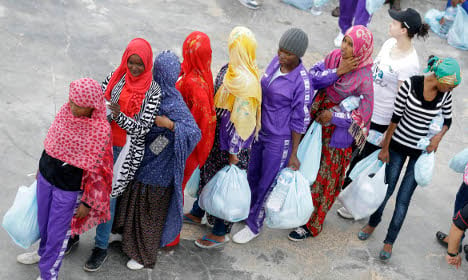 Malmström was speaking ahead of the first anniversary of the Lampedusa disaster. In September 2013, 366 people died when a boat sank off the coast of the Italian island.

She argued that EU countries should take more action to share the burden of taking in refugees from outside the European Union, suggesting that nations should work more closely together "to develop a responsibility distribution mechanism between all EU countries".

The commissioner said that solidarity within the EU when it came to taking in refugees was "on the whole non-existent" at present.

Some countries receive only "a handful" refugees even though "the world around us is on fire," she argued.

Sweden has one of the world's most open and tolerant approaches to immigration and is expected to welcome a total of 100, 000 refugees in 2014.

It currently takes in more asylum seekers than any other European country.

The Lampedusa disaster: one year on Cecilia Malmström says some EU countries are not taking in their share of refugees. Photo: TT

The victims of the Lampedusa disaster, many of them fleeing conflict and persecution in Eritrea or Somalia, were within sight of the Italian island on October 3rd 2013, when the tiny fishing boat they had been crammed onto in Libya developed engine trouble and began to tilt alarmingly.

A whole section of the boat caught fire. Some people threw themselves overboard, while others stampeded to the opposite end of the vessel to escape the flames.

Fatally unbalanced, the 20-metre boat capsized, condemning those trapped in the hold to death by asphyxiation.

But a year on, Lampedusa is no longer the worst accident of its kind. Last month, 500 people died off the coast of Malta in a shipwreck triggered by the vessel being deliberately rammed by traffickers trying to force its human cargo onto another, smaller boat.

Sweden takes in 19 per cent of EU's asylum seekers

In her critique, Malmström noted that even after these accidents, some nations still fail to take in the quota of refugees recommended by the UN.

"This is nothing short of a disgrace", said Malmström.

In 2014, a total of nearly 3,000 refugees have drowned in the Mediterranean, according to the United Nations.

Cecilia Malmström is about to leave her post as the EU commissioner responsible for Migration. She will take on a new role focusing on EU trade.