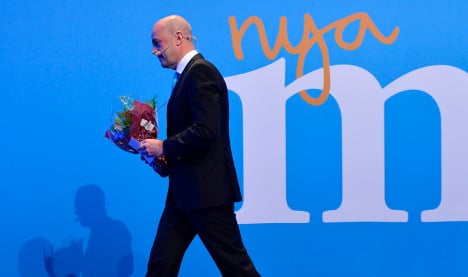 Fredrik Reinfeldt is exiting Sweden's political stage. Photo: TT
The 24 ministers that made up Fredrik Reinfeldt's top team arrived at the Cabinet Office in Stockholm on Thursday morning, following a farewell event on Wednesday night.
"It was great closing party yesterday," outgoing Foreign Minister Carl Bildt told the Dagens Nyheter (DN) newspaper as he arrived. He also tweeted about it.

After a very late but highly enjoyable evening now on the way to our last cabinet meeting. I suppose decisions will be as wise as ever.

But others appeared more tired and sombre as they discussed the upcoming political changes in Sweden.
"Of course it is sad. We had wanted to continue ruling. There are people that you've worked with for a number of years that you have become pretty close to as well," departing Minister for Integration Erik Ullenhag told DN.

Carl Bildt (centre) will be replaced as Sweden's Foreign Minister
Elections 2014: Most memorable moments
Exiting Prime Minister Fredrik Reinfeldt has kept a low profile since Sweden's general election last month, with the exception of a visit to the United Nations in New York and the official opening of parliament on Tuesday.
After eight years in power, his centre-right Alliance is making way for a Red-Green coalition, led by the Social Democrats and with the Green Party becoming part of a Swedish government for the first time in history.
The next step in the political process is for Stefan Löfven to be officially voted in by parliament. The country's 349 new national politicians will gather later this afternoon. Members of the former centre-right ruling Alliance parties have suggested they will abstain from the vote, which means it is almost certain that Löfven will be selected.
What's next on Sweden's political stage?