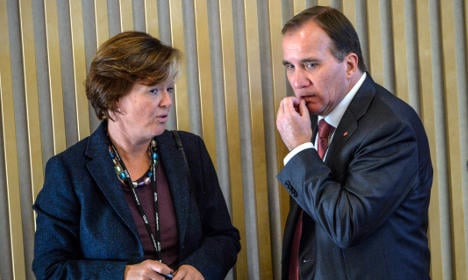 Social Democrat leader Stefan Löfven and Party Secretary Carin Jämtin. Photo: TT
At 9am on Friday Löfven is expected to reveal his ministers. He will also give his inaugural speech as Prime Minister, in which he will explain his platform for ruling the country.
To read the action as it happens, follow our live blog here.
Sweden's new cabinet will be made up of 24 ministers, with 18 from the Social Democrats and six from the Green Party, reported the TT news agency.
Many of the broader details of Löfven's plans have been made public throughout the week, including plans to fatten Sweden's Defence Force, to add two years to compulsory schooling, and to keep restaurant sales tax levels.
What happen's next on Sweden's political stage?

Löfven celebrates being voted in as Prime Minister on Thursday. Photo: TT
In forming his team, Löfven has reportedly called in the help of former Social Democrat Prime Minister Göran Persson, reported the Aftonbladet newspaper.
His team will also be working on their future budget, which must be passed in order for them to remain in government.
Löfven was voted in as the new Prime Minister of Sweden on Thursday, winning 132 yes votes. 49 people voted against him and 154 abstained.
The Moderate Party, which governed Sweden for the last eight years with the help of the centre-right Alliance coalition, also plans to release a budget.
More to follow