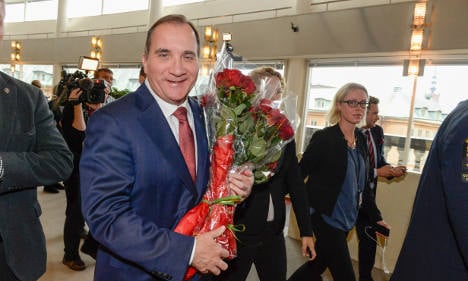 Check out The Local's guide to the most important and interesting appointments made by Sweden's incoming Prime Minister Stefan Löfven. His new ministers have been to meet King Carl XVI Gustaf at the Royal Palace.

Plus, check out our timeline to find out what happens next on Sweden's political stage.

Below are the key faces you'll need to get used to seeing over the next four years.

Social Democrat leader Stefan Löfven (left) is set to become Prime Minister. Green Party spokesperson Åsa Romson (right) will be his Deputy. Gustav Fridolin (centre) who is the Green Party's co-spokesperson will take over as Education Minister. Recognise the man on the far right of this picture? Former Prime Minister Fredrik Reinfeldt has somehow crept into their snap.

James Savage, Managing Editor, 10:05
The fact that the Finance Ministry will be split between Social Democrats and Greens should help the two parties build foundations for cooperation. The Finance Ministry is always a key department, and so it is a coup for the Greens to be so involved.
Maddy Savage, Editor, 10.:02
Outgoing Foreign Minister Carl Bildt has sent his congratulations to Margot Wallström who will be taking over the role.

I warmly congratulate Margot Wallström as new FM of Sweden. She brings EU experience to the position.

Löfven plans to buy more of Jas Gripen jets like this one. Photo: TT
Oliver Gee, Deputy Editor 9:38
Löfven concluded his speech to a great applause from Parliament. He finished by saying: "Our willingness to cooperate and stick together is Sweden's strength".
Maddy Savage, Editor, 9:36
Löfven is starting to reveal the names of his top team and we will share the full list here shortly. After his speech, there will be a media briefing. The new government will then walk together to the Royal Palace. At 12.00 the formal change of government will take place
Maddy Savage, Editor, 9:36
There is good news for those of you learning Swedish. Löfven says that more money will be spent on providing state-funded language courses for foreigners (SFI)
Oliver Gee, Deputy Editor, 9:35
Löfven has promised that Sweden will maintain a "generous asylum policy" and says he will encourage "other EU countries to take responsibility for asylum."
But he is cutting the post of Integration Minister, saying that there needed to be a broader cross-departmental approach to immigration.
Maddy Savage, Editor, 9:34
Sweden is experiencing a change in political direction, with Löfven and his top team of Social Democrat and Green politicians taking over from the centre-right Alliance. The Alliance was in government for eight years, led by Fredrik Reinfeldt. You can look back at the former Prime Minister's career by clicking through this photo montage.
Oliver Gee, Deputy Editor, 9:30
Löfven has been speaking for almost thirty minutes and he as described Sweden as in a "serious situation".
He said: "Unemployment has hit hard and is present at high levels. School results are plummeting and there are major shortcomings in the welfare system. The gaps are growing and inequality between men and women remains. Sweden has missed 14 of 16 climate goals".
He has promised higher sick benefits and to remove time limits for long-term sick leave.
Maddy Savage, Editor, 9.29
If you want to know more about Stefan Löfven's career before he joined parliament, you can check out our picture gallery.
Maddy Savage, Editor,  9:20
One thing that is different in Sweden compared to other countries is that Löfven's top team do not all have to be elected politicians. They could be drawn from business, education or the welfare sector. Even Löfven himself has little experience in politics. This is the first time he has been a Member of Parliament.
James Savage, Managing Editor, 9:18
Another interesting job to look out for is Minister for Financial Markets. While this job might not sound too exciting, it is one of the two ministerial posts in the all-powerful Finance Ministry. There are strong rumours that the job will go to Per Bolund, economic affairs spokesman for the Greens. His good relationship with Magdalena Andersson (pictured below), the Social Democrats' likely finance minister, works in his favour. He's also widely viewed as competent. But union giant LO, which funds the Social Democrats, might not be happy for the Greens to get the job. If Bolund does succeed, it will be a big coup for the Greens.

Magdalena Andersson. Photo: TT
Oliver Gee, Deputy Editor, 9:15
Löfven just said this will be a "feminist government". Otherwise, he has been mainly confirming much of what we know so far. Many of the broader details of Löfven's plans already been made public including plans to fatten Sweden's Defence Force, to add two years to compulsory schooling, and to keep restaurant sales tax levels. Over to James for a bit more context.
James Savage, Managing Editor, 9:10
One of the big jobs to look out for is the post of foreign minister. Former European Commissioner Margot Wallström (pictured below) is being widely touted as the prime candidate, although some have questioned whether her performance in Brussels was up to snuff – the Economist described it as 'a disappointment', memorably mocking her 'kum-bay-yah' approach, which 'grated with colleagues.
More substantially, some say she failed in her job to bring the EU closer to the people. But she's enormously popular in Sweden, particularly with Social Democrat voters – and her defenders say her EU role would have defeated most people. She's also a woman, which many in the party and beyond would see as a plus.
It's also hard to see who else would qualify for the job: former Prime Minister Göran Persson was rumoured to be a candidate for a while, but he's issued strong denials. And foreign policy spokesman for the Social Democrats Urban Ahlin has just been made Speaker of the Riksdag. Wallström is looking like a shoe-in.

Morning readers – it's an exciting day for Swedish politics today – we get to learn the faces that will match the 24 new minister posts. We've already heard that 18 of the ministers will be from the Social Democrats and six will be from the Green Party (Miljöpartiet). But who will they be?

The top spot, of course, was given to Löfven on Thursday when he was voted in as the new Prime Minister of Sweden, winning 132 yes votes. 49 people voted against him and 154 abstained.

It's 9am now, meaning the speech is beginning. More to follow.