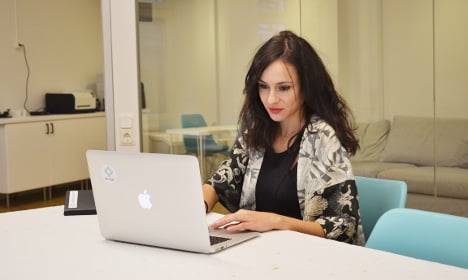 Faustine Rostand. Photo: Private
It was never a given in Faustine Rostand's life plan to make her way to Sweden. The country was completely unknown to her, yet she somehow ended up in southern Sweden's Lund for an exchange year in 2007.
"Right away when I arrived in Sweden, I was impressed by everything. It was like living in the future – that's how I got this massive crush on Swedish culture," she says.
The crush didn't pass once she returned to France and in 2012 Rostand found herself in Sweden again – this time with plans to start her own company. However, things took a turn after she learnt about Virtusize – a Swedish online shopping start-up.
Virtusize, which was established in Stockholm and now has customers in 100 countries, allows online shoppers to find clothes that fit without having to try them on, by visually illustrating the size and fit of clothing. The outline of the prospective buy is overlaid on the silhouette of the garment you own in order to give you a better idea of what to expect when the parcel arrives. The company has over 30 retailers including heavyweights like Acne.
Rostand joined the team last year working with sales for the French market and other continental countries. She considers her job in Sweden to be the perfect combination of fashion, technology, and ecommerce.
"Stockholm is like the Silicon Valley of Europe – so many start-ups – and I'm really happy to have the opportunity to work for one of these," she says.
Because of the nature of her work, Rostand has the opportunity to travel back and forth between France and Sweden and says she's become a combination of the two cultures.
"I'm becoming schizophrenic. The first day that I'm back in France I'm super happy and everything is very intense, but come day three and I miss the order and structure of Sweden." Rostand has identified a few prominent differences between France and Sweden during her time in the country and with the company.
"The workplace hierarchy is flat in Sweden. In France it's about what you have on your business card, in Sweden it's what you've accomplished."
She considers the hierarchic structure of some organizations to be a barrier that not only slows down the decision-making but also disrupts the flow of communication between employees. And the Swedes and the French aren't at all similar when it comes to dealing with disagreements.
"In France we don't fear conflict. If there's something on our mind, we spit it out, even if it creates drama. Here people avoid it," she says.
"I adapted by seeing things with another kind of perspective. But I haven't been confronted at work yet, probably because there are no barriers in the communication in the workforce. Come to think of it, perhaps the Swedes have found this way to communicate to avoid confrontation in the first place," she says.
Settling into the Swedish lifestyle never seemed to prove much of a struggle for Rostand.
Though initially worried about how to greet people in Sweden, she says she never takes the initiative to hug her Swedish acquaintances, instead taking the lead from them. In formal situations she's learned to shake hands instead of kissing on the cheeks.
"When I'm back in France, I will shake hands with people I don't know. Some think it's cool, others think it's rude. So I have to explain that I'm living in Sweden."
Integrating into the Swedish culture happened automatically, Rostand says, believing that her reasons for coming here are to thank.
"I have a vision of the life I want to have and it kind of fits with Sweden. Maybe I was born in the wrong country from the beginning. But to people here, I'm still very French. I'm always a bit inbetween. But I can see the value of each culture. And I have become more tolerant on an everyday basis," she says.
Mimmi Nilsson