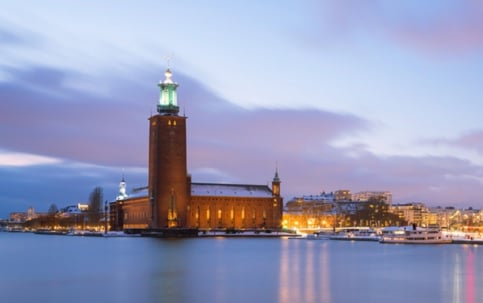 The annual event traditionally starts at the Blue Hall, the venue of the Nobel Prize Banquet, with the welcome speech of the Stockholm’s City Council President. Margareta Björk emphasized that Stockholm, as a “city of innovation”, is highly interested in the international academic cooperation.

During the reception the guests were provided with information about Stockholm and its City Hall, and then invited to a mingle in the glorious Golden Hall. NFGL journalist Diana Imamgaiazova asked some participants to share their impressions of the event.

“It’s very flattering, of course, that city governors welcome you in such a beautiful setting. I also like it because the event allows you to look beyond the circle of classmates and meet people with different backgrounds. I even met a new friend while we were queuing for the tickets – it was very special experience too!”

“Sadly, we did not have much time to interact during the mingle. I also expected to have a short guided tour around the Hall, but it wasn’t provided… that was a bit of disappointment. But in general I enjoyed the reception. I have been there with my friends from the Stockholm University and we made some noise when our university was introduced by a speaker. I liked that the atmosphere there was very friendly and not so officious”.

“I and my friends were coming late and we had to take a cab to get there in time. We just couldn’t miss it! At some point the event’s hostess said that we made our first step towards the Nobel Prize by coming for the reception in the Blue Hall. She got me! I was very keen to have shared experience with the Nobel Prize’s nominates – this is so inspiring! The event also made us feel special because the Swedish government acknowledges and welcomes our presence in the country”.