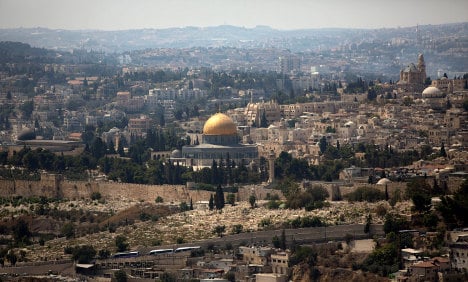 Debates over Löfven's comments continue in Jerusalem. Photo: TT
Ambassador Carl Magnus Nesser was called in by the ministry's deputy director general for Europe, Aviv Shir-On.
According to the AFP news agency, he "protested and expressed Israel's disappointment" at Swedish Prime Minister Stefan Löfven's announcement about his country's shift in approach, which he made during his first speech in parliament on Friday.
Shir-On warned that such a move would "not contribute to the relations between Israel and the Palestinians, but in fact worsen them."
Israel protests against Palestine recognition
His comments follow similar strong remarks from Israel's Prime Minister Benjamin Netanyahu and Foreign Minister Avigdor Lieberman over the weekend. They denounced Löfven's hopes that recognition would be a step towards resolving the decades-long Israeli-Palestinian conflict.
Lieberman said he regreted that Sweden's new Prime Minister was "in a hurry to make statements on Sweden's position regarding recognition of a Palestinian state, apparently before he had time even to study the issue in depth."
Palestinians want an independent state in the West Bank and Gaza, with a capital in East Jerusalem.
Gaza's boundaries are already clearly defined. But there have been intense debates over what areas should be included in the West Bank and East Jerusalem.
Israel has long insisted that the Palestinians can only receive their promised state through direct negotiations and not through other diplomatic channels.
Negotiations between Israel and the Palestinians are currently suspended. Children in Gaza. Photo: TT
Palestinians in Stockholm react to Löfven speech
Speaking from the Israeli foreign ministry on Monday, Aviv Shir-On said the newly-elected Swedish premier's decision to focus on the Palestinian issue was "strange" given the turmoil, wars and "daily acts of horror" taking place in the region.
The Swedish embassy in Israel did not comment on the meeting.
Sweden voted in favour of the Palestinians obtaining the rank of observer state at the United Nations in 2012, which was granted despite opposition from the United States, Israel and other countries.