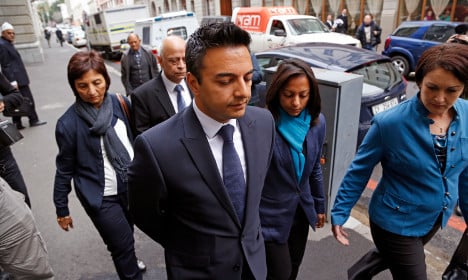 Shrien Dewani at a previous court appearance. Photo: TT
Dewani told the High Court in a written statement that he considered himself to be bisexual – a pre-emptive strike against possible prosecution plans to portray him as a gay man trapped in an arranged marriage which he ended by hiring hitmen to kill his wife.
Glancing nervously around court and clad in a sombre suit and tie, Dewani told the court he was "not guilty" of charges of murder, kidnapping and obstructing justice.
He fought a three-year legal battle to avoid being extradited from Britain to South Africa, claiming he had mental health problems, including depression and post-traumatic stress.
But he was sent back to South Africa in April, where he was found fit to stand trial for the murder of his Swedish-born bride Anni (nee Hindocha), who was shot dead on November 13th, 2010, aged 28.
In a statement read by defence layer Francois van Zyl, Dewani said he was bisexual but was "instantly physically attracted" to Anni and came to love her.
Dewani claims that he and his bride were hijacked at gunpoint as they drove through Cape Town's impoverished Gugulethu township in a taxi.
Dewani escaped unharmed, but his wife's body was found in the abandoned car the next day.
The court was shown graphic video footage of the crime scene, including images of Anni's body in a short black evening dress sprawled across the car-seat.
This prompted audible gasps from Anni's family, who sat across the courtroom from Dewani's relatives. Both families are of Indian origin.
Three South Africans have been tried and convicted and are serving jail sentences of between 18 years and life for their role in Anni Dewani's death.
Taxi driver Zola Tongo admitted guilt in a plea bargain and claimed that Dewani had offered him 15,000 rand ($1,300) to have Anni killed.
He is serving an 18-year jail sentence and is expected to play a key role in the prosecution's arguments.
Another major witness will likely be a sado-masochism "master" who will claim that Dewani paid him for sex.
Gay prostitute Leopold Leisser is said to have claimed in a statement to British police that Dewani had told him he was getting married to a "lovely girl", but he needed "to find a way out of it".
In his statement to the court, Dewani said: "I've had sexual interaction with both males and females. I consider myself bisexual."
"My sexual interactions with males were mostly physical experiences or email chats with people I met online or in clubs, including prostitutes such as Leopold Leisser."
– Justice and closure –
Dewani said his memory of the exact details of the alleged hijacking had been affected by "the traumatic experience which resulted in the loss of my wife".
He described how two men hijacked Tongo's taxi at gunpoint and ordered them to lie down.
"We were both terrified and we immediately complied with his demands. "Anni was screaming," as the men took their money, phones and a ring, he said.
"The next thing I remember, they were both shouting at me to get out. I pleaded with them to let us both go. They refused."
He said the men told him they would leave Anni at the police station and ordered him out of the car with a gun to his head.
"I tried to open the door but it would not open. I recall the window opening. I recall hitting the ground and the car speeding way.
"The last thing I had said to Anni was to be quiet and not say anything."
Dewani said that after finding someone to call the police and describing the events, he was taken to the luxurious Cape Grace hotel where he and Anni were staying.
When he heard later that Anni had been found shot dead, he said: "At that point my whole world came crashing down."
The trial was adjourned until Wednesday after the prosecution's first witness, a pathologist, described Anni's wounds and said there was no evidence of a sexual assault.
Url copied to clipboard!