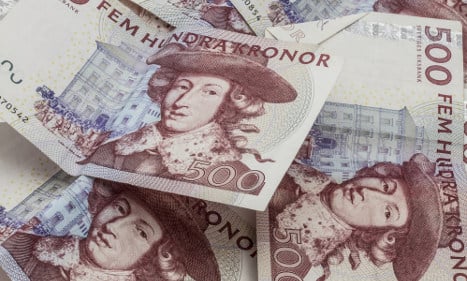 High earners in Sweden will have less cash in future. Photo: Shutterstock

"If the government's proposed tax increases are implemented, then this will harm the economy and mean some earners will face high tax levels that we haven't seen in Sweden since before 1991.

If the coalition is serious about working across political bloc boundaries then it should put this proposal to one side and appoint a new parliamentary committee to reach a broad agreement on taxes.
Sweden already has an international image as a country that has high taxes for workers alongside a compressed wage structure.
The economic return on academic studies in Sweden is among the lowest in the world, according to the OECD. By raising taxes for only the highest earners, this further reduces the return for most degree holders.
This is not good news for Sweden's higher education or the country's image as a competitive knowledge-based nation.
Increasing the top marginal tax rate by three percentage points is not expected to produce any substantial increase in tax revenues, nor will it really change the distribution of income in Sweden.
Saco has long called for a parliamentary inquiry to conduct a comprehensive review of the entire tax system.
If Sweden wants to be globally competitive in terms of knowledge, then the tax system must help to create good incentives for knowledge building.
A rise of already high tax rates on workers' income is hardly conducive to this". Shortened and translated by The Local with permission of Saco.