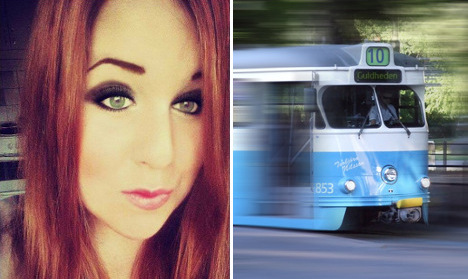 Sandra Hallén and a Gothenburg tram. Photo: Facebook/Shutterstock
Sandra Hallén, a 19-year-old teenager from Gothenburg in western Sweden, wrote about her tram trip on Facebook.
She explained how she'd witnessed four teens picking on a girl with Down's Syndrome.
"I heard them say stuff like 'Stop drooling, you're repulsive'… the lonely girl was sobbing… and it just broke me," she wrote.
The teenager said she had intervened because no one else would, which prompted another passenger to chime in with support.
The four teens were forced off the tram, then Hallén accompanied the girl to her final destination.
"I never thought I'd dare to do something like this, but oh, how wrong I was. Adrenaline is a powerful phenomenon, that's all I'm saying," she wrote on her Facebook wall.
By 4.30pm on Tuesday, Hallén's post had been liked 116,000 times online. That means over 1.2 percent of Sweden's population has voiced its opinion on the post. Many others will have read the post.
"It's overwhelming, I can’t believe the response I'm getting, I'm just so unbelievably happy and flattered," she told The Local.
"I've been getting tonnes of positive messages from people – there's still 500 unread messages in my Facebook inbox."
She added that she "saw no other alternative" than to step in.
"I felt that it was time to do something. I have social anxiety and waited, just as everyone else, for someone else to react to what was going on – someone has to, the situation was so serious, so brutal – but no one intervened, so I had to," she told The Local.
"They never stopped, it can't be like that. If no one else cuts in, I, as a fellow human, have to."
Her Facebook post, which was flooded with comments of support, ended with a call for help from the rest of the Swedish population.
"We need to stop bullying, this is really not OK. More people have to dare to intervene!" she wrote. "No one can do everything but everyone can do something, together we're strong."