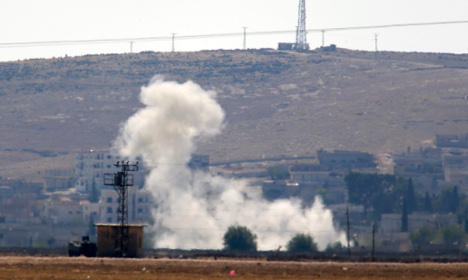 Fighting on the Turkey-Syria border. Photo: TT
British newspaper The Times alleges that two Swedes were among 180 foreign fighters swapped for 46 Turks who were taken prisoner from their country's consulate in Mosul, Iraq, in June and released last month.
The newspaper claims the list also includes two British citizens, three French nationals, two Macedonians, one Swiss national and one Belgian.
But Swedish Foreign Ministry press spokesperson Erik Wirkensjö told The Local that the allegations remained unconfirmed.
“We have no knowledge of any Swedish person being exchanged for Turkish prisoners".
He added: "The thing with these kinds of situations in general, is that the Ministry isn’t always aware of Swedish citizens who have been deprived of their liberty.”
Asked where he thought the reports of the hostage swap were coming from, he said:
“It is hard to say, but we can’t comment on it. We don’t comment on unconfirmed things in the media, we only deal with what’s confirmed by credible sources.”
On Monday, an unnamed senior British government official told the BBC that reports that UK jihadists were involved a prisoner swap between Isis (also known as Islamic State) and Turkey were "credible".
Sweden's Expressen newspaper says it has spoken to the father of one of the captured Swedes.
The newspaper reports that the man's son – who is understood to be 22 but hasn't been named – became increasingly "radical" in recent years and moved away from Sweden to study Islam in Mauritania.
The paper says that his father noticed him changing his style of dress and and becoming "more radical." The family apparently had several discussions about the conflict in Syria and the son openly expressed some sympathy for the extremist groups that he said wanted to fight "Iraq's corrupt government."
According to Expressen, the father found out about his son's involvement in the hostage exchange after asking around at mosques he used to frequent in Sweden. He was told his son had since been released and was now living in either Syria or Iraq.
Other Isis fighters involved in the swap are understood to have been taken to Turkish hospitals or kept in Turkish prisons. Others are understood to have been released and taken in by Syrian rebel groups.
The release of the Turkish hostages hit the headlines at the end of September. There were 49 in total – 46 Turkish citizens and three Iraqis – and included the Turkish consul, diplomats, special forces police and children.
Security experts have suggested that the Turks were key "bargaining chip" for Isis.
On Monday night there were protests at Stockholm's Arlanda airport, where 150 people tried to raise awareness about the fighting in the Syrian city of Kobane.
The TT news agency reported that demonstrators were also protesting against Isis and what they viewed as Turkey's passiveness in the conflict.
"We have to do something, the city of Kobane is under siege and we fear a massacre," demonstrator Rezgar Ashnagar told the Aftonbladet newspaper.