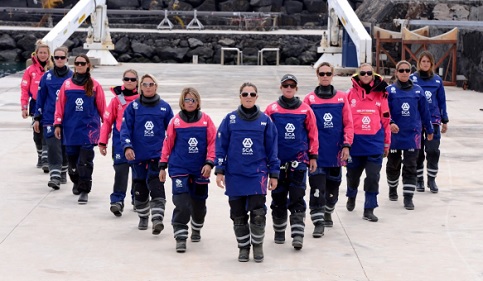 For SCA this journey started in 2012 when the Swedish hygiene and forest products company decided to participate with an all­-female crew, Team SCA. This is the first all­-female entry in this epic race since 2002, and it is probably the first time in the race’s history that there has been a team that is being put together in the same way as an all­-male team.

Over 250 female athletes from across the world applied to be part of the Team SCA squad. The final squad now comprises 14 elite female athletes from Great Britain, USA, Switzerland, Australia, and The Netherlands, out of which a crew of 11 plus one on­board-­reporter will be selected to sail the boat throughout the nine­-leg race, visiting 11 cities, nine months of racing across five oceans and over 38,000 miles.
Team SCA represents the best of the best in female offshore sailing with experiences from numerous challenging races around the world, including Olympic racing and around the world solo races.
When they cross the start line in Alicante each of the eleven women on board know that they are an essential part of the team ­ whether they are trimmers, helming, on the bow, in the pit or navigating. Each crew member has a defined role, but equally each crew has to be able to multitask, fit in and fill in where necessary.
They must be multi-­skilled covering many roles from electronics and engineering, to repairing sails and interpreting weather systems, if something breaks at sea they must fix it, they must rely on each other day in day out for over 25 days at a time.
This race is not about one leg or one race, but nine races. When they arrive in Gothenburg at the end of June 2015, their ambition is to be the best performing all­-female team in the history of the race. But there is no easy route, no easy way to traverse oceans no matter whoever you are.
#weareteamsca
You can meet the all­-women team here in this video: