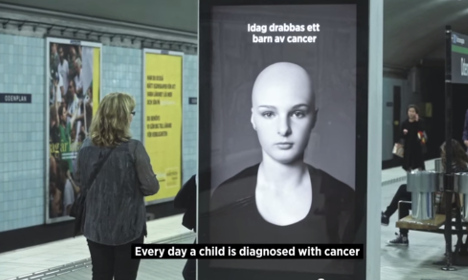 Back in February a Swedish pharmacy turned heads after installing interactive billboards in Stockholm's subways. Every time a train passed the billboard, the hair of the model in the picture blew around, giving the impression that the train had sent a gush of air across the platform.

Innovative, without a doubt. Attention-grabbing, absolutely.

Earlier this month, Swedish advertising agency Garbergs snapped up the idea, hoping it could be used for the greater good.

It created an eye-catching Cancer campaign and the first advert was installed in Stockholm's underground in the beginning of October. The installations were only there for two days, but a YouTube clip of the campaign (below) has had a much longer life. In less than a week it has attracted 300,000 hits.

The focus of the project is 14-year-old Linn. As a train passes the billboard, the wind makes her hair blow so violently that it flies off her head.

That's when it becomes clear that this is not a copycat-ad. Linn was diagnosed with cancer and lost her hair because of it.

The billboard then displays a message explaining that one child is diagnosed every day from cancer, and urges people to donate.