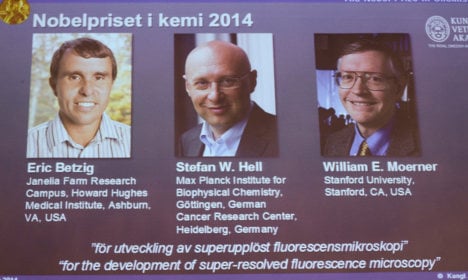 The Nobel winners. Photo: TT
The announcement was made at Stockholm's Royal Swedish Academy of Sciences.
"For a long time optical microscopy was held back by presumed limitation: that it would never obtain a better resolution than half the wavelength of light," the jury explained in a statement.
"Helped by fluorescent molecules the Nobel Laureates in Chemistry 2014 ingeniously circumvented this limitation. Their ground-breaking work has brought optical microscopy into the nanodimension."
What does it all mean?
Until recently, scientists were convinced they couldn't improve a microscope's resolution of 0.2 micrometres. This was due to many factors including the wavelength of light.
But the scientists awarded today, developed the tools to allow experts to see tiny molecules.
The Nobel panel in Stockholm said it was as if experts had previously only been able to see buildings of a city and not the people within those buildings or how they interacted. The work of the winners changed this.
Rather than making things clearer by increasing magnification, the laureates found a way to use the fluorescene in molecules to make them more visible to scientists using microscopes.
Now, scientists are able to track these molecules and learn more about them. In the process they hope to learn more about how diseases develop.
The winners are set to take home eight million Swedish kronor – just over $1,113,000.
US-born Betzig was born in 1960 and got his PhD at Cornell University in New York. He now works at the Howard Hughes Medical Institute in the US.
Moerner was also born in the US, in 1953. He got his PhD at Cornell University too, and now works as a Professor at Stanford University.
Hell, meanwhile, was born in 1962 in Romania. He got his PhD at Heidelberg University in Germany, and now is a head of the German Cancer Research organization.

Beautiful drawing of the #nobelprize2014 Laureates in Chemistry. pic.twitter.com/48ExczgJIm

The Local's live blog from the Nobel Prize Ceremony
Previous Nobel laureates in Chemistry include Marie Curie, Ernest Rutherford and Linus Pauling.
Last year's prize went to Martin Karplus, Michael Levitt, and Arieh Warshel for developing multiscale models for complex chemical systems. Their research meant "computers have taken over chemistry," an academy spokesman told The Local at the time.
The 2014 Nobel prizes for Literature and Economics are also set to be announced in the coming week, with the Nobel Peace Prize revealed in Oslo.
All the winners will receive their awards in December.