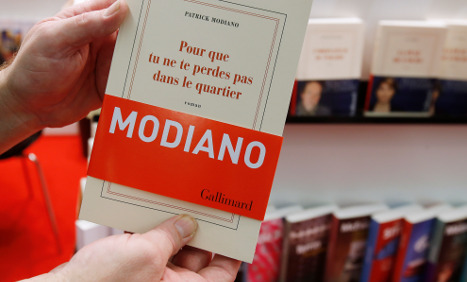 Have you read any Modiano? Photo: TT
1. Celebrated in France
He may not be well known in the Anglo literary world but he certainly is in France, where he is considered one of the country’s most celebrated writers.  His crowning moment before winning this year’s Nobel Literature Prize was in 1978 when he picked up France’s prestigious Goncourt prize for “Missing Person”. He’s also won the National Literature Grand Prize (1996) and the French Academy’s Grand Prize for his novel “Ring Roads”.
2. Work inspired by the Nazi Occupation
The 69-year-old, born at the end of World War Two has described the Occupation of France as "the soil I grewup in". On awarding him the Nobel Prize the Swedish Academy said it wanted to celebrate his "art of memory" in capturing the lives of ordinary people during German rule, which lasted from
1940 to 1944 in France.
3. Writes more than just novels
Modiano has more strings to his bow than just being a novelist. He co-wrote the screenplay for Lacombe Lucien, a movie directed by Louis Malle, which focussed on French collaboration with the Nazis. He has also written children’s books.
4. Acts too
Britain’sGHuardian Newspaper points out that The film database IMDb records that Modiano is not only a screenwriter for both film and TV, but an actor, who appeared with famous French actress Catherine Deneuve in the 1997 Raoul Ruiz film Genealogies of a Crime, playing a character called Bob.
5. Doesn’t like the limelight
Modiano, who lives in Paris, is known to shun media attention and rarely gives interviews. After meeting Modiano France Today magazine wrote:You’ll never stumble upon him at one of those literary cocktail parties Parisian editors adore, nor will you spy his rangy figure on popular talk shows. Modiano’s interviews are few, but his words are priceless.
Want five more facts about Patrick Modiano? Head to The Local France site