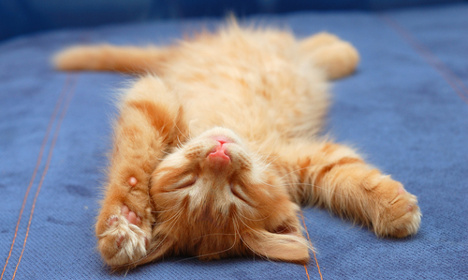 The film will be the purrfect night out for cat fans. Photo: Shutterstock
If you type the word cat into YouTube you get 36 million results.
Cashing in on the craze is a new cat video festival – Catvidfest – which screens home videos of cats that have never been uploaded to the internet.
It's coming to Stockholm on Thursday night, with all tickets for the event being snapped up in just three hours.
A previous sell-out event in Minnesota in the US attracted 10,000 feline fans.
"There's an insane interest in cute cats," the Stockholm show's producer Christoph Fielder told The Local. Photo: Umberto Salvagnin/Flickr
"There's just so much information coming to us all so fast, news about war, Isis, famine… and we need a mental break. Cats videos are like a drug. They're an escape."
After the show at the Södra Teatern on Södermalm sold out so speedily, Fielder and his team decided to add a Saturday matinee which has also sold out.
But why do Stockholmers want to go to a theatre to watch cat videos?
"These have never been seen before. They're not online. People sent them in had to sign a contract promising the videos haven't been uploaded," he said.
"Plus there's a panel of incredibly intelligent people talking about cats and why people want to see them."
The panel includes sociologists and psychologists who intend to break down just why humans are so fascinated by their feline counterparts.
While Fielder himself says he's not "a cat addict", he suggests that anyone who's never got into the feline fame videos should check out Maru (below), whose videos have attracted tens of millions of hits online.