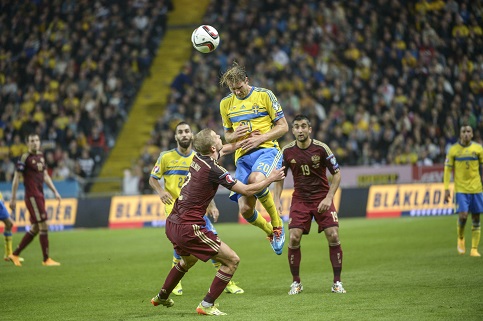 When you go abroad, you suddenly become more patriotic.

You are strangely happy to hear your mother tongue somewhere thousands kilometers from your home town, happy to meet someone who used to live in the same place as you did, and happy to find ingredients from your local cuisine on the shelf of a foreign supermarket.

You forget all the bad things about your country and start promoting your state as the best tourist destination among your new friends and colleagues. Sports in general, and football in particular, gives you an opportunity to express your feelings in public and not to be reputed nationalist.

Big competitions unite people all around the globe, but at the same time, sports always ignite national identity and pride.

I have been staying in Sweden for one month. I have already begun to feel at home here, but at the same time I still miss my country. So, I decided to go to the football match to support the Russian national team.

The first problem I was faced with was the choice of the which side to support, which group. Which side should I choose: Russian or Swedish?

The Russian-fan section is supposed to be for people who come from Russia. So, the seats in this area was reserved for Russian fans. I bought a ticket for the ordinary section, but I still was on the Russian side of the arena. I was happy.

The day before the match, my happiness was darkened. Zlatan Ibrahimovic had not been named in Sweden's starting squad.

When your national team doesn’t have any big stars, you have to admire someone else. In my case it was Zlatan. His t-shirt was the first thing I bought in Sweden. I looked forward to seeing him yesterday, and I wasn't the only one.

Before coming to Sweden I didn’t feel that patriotic. I brought with me neither the Russian flag, nor any other national items. I had only a Zlatan t-shirt.

It seemed impossible to take it with me. Other people didn’t think so. The entire Russian side (except the area reserved for Russian fans) was filled by Swedish guys, of course, in Zlatan t-shirts. I was the only person without the shirt, and only one other person seated in the Russian section seemed to support Russia. We were seated together, shoulder to shoulder, listening to national anthems.

Russia scored a goal first. Swedish fans were sad. They stopped singing and even talking to each other.

I felt happy – but alone. Then Sweden scored a goal. The whole section was cheering. I was upset and sitting quietly. People around me started singing again. There was a competition between two sections to see who could sing louder. I became interested despite myself, and ten minutes later I found myself singing "Vi är svenska fans allihopa" – "We are all fans of Sweden". Someone gave me a Swedish scarf.

That evening, the teams on the pitch weren't able to determine who was stronger. It was a draw. And I wasn't able to identify what team I belonged to.