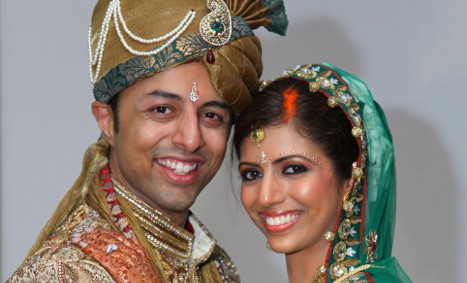 Shrien Dewani (left) and his Swedish-born bride. Photo: TT
Cross-examination of prosecution witness and convicted killer Mziwamadoda Qwabe was cut short after he told Judge Jeannette Traverso in the Cape Town High Court that he was suffering from stomach cramps.
Shrien Dewani's lawyer, Francois van Zyl, announced that Dewani also "had an upset stomach", and the trial was adjourned until Monday.
Dewani is accused of conspiring to have his 28-year-old Swedish-born wife Anni (nee Hindocha) murdered while they were on honeymoon in Cape Town in 2010.
Qwabe, who is serving a 25-year jail term for his role in Anni's murder, has testified that he and an accomplice were paid to kill her.
He said Dewani's taxi driver had contacted him and said "there was a husband who wanted his wife to be killed".
Qwabe then detailed how they staged a hijacking, let the driver and Dewani go, and shot the woman before going out to party with the cash they had made for killing her.
Dewani has pleaded not guilty to murder and says he was forced out of the taxi at gunpoint before his wife was shot.
The prosecution is expected to argue that the British millionaire of Indian extraction wanted her dead because he is a gay man who felt trapped in an arranged marriage.
Dewani's formal written admissions to the court show his computer was logged onto a male gay website just hours after his wife's body was found.
He confirmed he registered for the 'Gaydar' website and 'Recon', a website for men into fetish gear, in 2004 with the username 'ASIANSUBGUY'.
Dewani has admitted to having paid for sex with male prostitutes but told the court he considered himself to be bisexual and that he loved Anni.
Dewani returned to Britain within days of Anni's death, and fought a three-year legal battle to avoid being extradited to South Africa, claiming he had mental health problems, including depression and post-traumatic stress.
But he was sent back to South Africa in April, where he was found fit to stand trial.