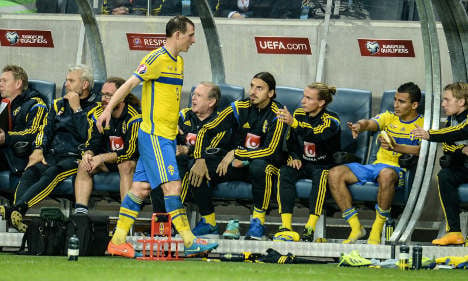 Sweden's star striker Zlatan Ibrahimovic (centre) remained on the bench. Photo: TT
The Rennes forward cancelled out Dynamo Moscow forward Alexander Kokorin's first-half opener as Sweden drew for the second time in as many group matches.
Meanwhile, Russia joined Montenegro and Austria in a share of top spot on four points.
However, it could have been different but for Sweden missing a first half penalty.
"It was an interesting match," Russia's manager Fabio Capello said.
"We played really well today and created more scoring opportunities than our rivals. Unfortunately the result didn't fit our expectations.
"Sweden also had chances especially in the dead-ball situations but we were much closer to a victory."
The hosts, who were sorely missing injured striker Zlatan Ibrahimovic, started in lively fashion but the 23-year-old Kokorin silenced the packed Friends Arena with a goal in the 10th minute.
Alexander Samedov found Kokorin and he worked his way into the box before shooting low past the outstretched hands of Sweden goalkeeper Andreas Isaksson.
Sweden were awarded a penalty after Igor Smolnikov fouled Jimmy Durmaz in the area.
But Russian goalkeeper Igor Akinfeyev confidently parried Sunderland midfielder Sebastian Larsson's spotkick in the 13th minute.
In the 22nd minute Spartak Moscow striker Artem Dzyuba had an opportunity to double the advantage but his close-range shot after a one-two with Kokorin went inches wide.
Three minutes after the restart Toivonen pulled the scores level as he converted Durmaz's precise left-wing cross from the edge of the six-yard box.
Zenit winger Oleg Shatov had a clear chance to restore Russia's lead in the 58th minute on a breakaway but his angled shot failed to find the target.