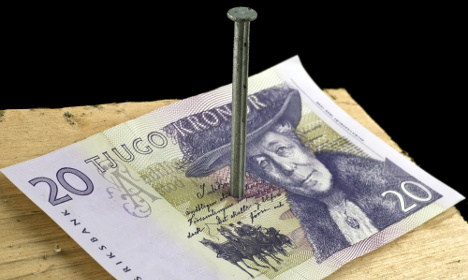 "These last years of unfinanced tax cuts have contributed to a bigger deficit in public finances, even when the economy has improved."

Andersson revised the growth forecast for 2014 by 0.4 percentage points to 2.1 percent.

The centre-right government — which lost power to a left-green coalition last month — pledged to return the budget to a surplus by 2017 but the incoming finance minister told Swedish newspaper Dagens Nyheter it would be "unrealistic" until after 2018. Magdalena who? Find out more about the Finance Minister and the rest of Stefan Löfven's top team

The new government has maintained its predecessor's objective of a one percent budget surplus which has not been achieved since 2008.

"It's time for a responsible policy. Rules are made to be respected," Andersson said, adding that the country's public finances were in a "troublesome" state.

"They give the impression that Sweden is very poorly equipped and when you consider the recession we've been through, it's the contrary — Sweden did very well," she told news agency TT.

The budget will be presented to parliament by October 24th at the latest.