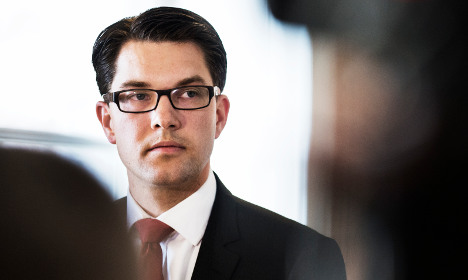 Jimmie Åkesson, the leader of the nationalist Sweden Democrats. Photo: Bertil Ericson/TT
The nationalist Sweden Democrats more than doubled their support in September's election, winning 12.9 percent of the country's vote.
Despite this, and the fact that similar parties around Europe have enjoyed comparable successes, researchers from Umeå University say that talk of increasing xenophobia around Europe is a "misinterpretation".
In a paper published on Monday, sociologists Andrea Bohman and Mikael Hjerm found that there were a variety of other factors that contributed to rising success at the polls – such as the parties being more organized and better at delivering their messages in ways that make people more comfortable voting for them.
"In theory you'd expect that the presence of radical right parties would bring out anti-immigrant attitudes, but they haven't – and this was surprising," Hjerm told The Local.
He added that the pair studied statistics measuring people's attitudes to immigrants, especially at the time of elections, and measuring the effect that the far-right parties had on the public.
How the Sweden Democrats went mainstream
The researchers looked at 16 European countries and various survey results from between the years of 2002 and 2012. They determined that there is no correlation between an anti-immigrant sentiment and the appearance of far-right parties on the political stage.
"Our studies led us to the conclusion that political parties on the radical right don't automatically influence people's attitudes towards immigration," the researchers wrote in an article in the Dagens Nyheter newspaper on Monday.
They added that such parties are just getting better at attracting voters who already sympathize with their policies.
Hjerm told The Local that Swedes tended to be more tolerant than their European neighbours.
"The level of anti-immigrant attitudes was much lower in Sweden than in other countries, but that's nothing new, we've known that for a long time, and we weren't interested in specific countries," he said.
As for what's likely to happen in Europe in the future:
"That's the million-dollar question," he responded. "Tolerance towards immigrants has been increasing in the 20th century and we've seen it flatline somewhat in the 21st century. But for these parties, there are more people to convince and they can definitely grow.
"But they haven't been able to convince people who don't support such politics. They can only grow (at the moment) if they get a larger proportion of those with aversive attitudes to vote for them." Stefan Jacobsson, the leader of the extreme right Party of the Swedes. Photo: TT