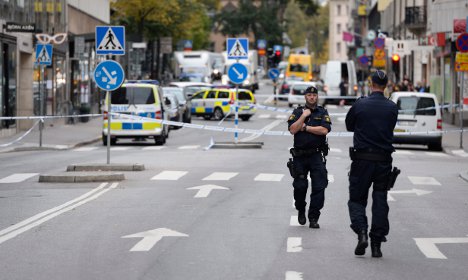 Östermalmstorg in central Stockholm is sealed off. Photo: TT
KEY POINTS
Police have confirmed to The Local that branches of Handelsbanken and Nordea were targeted by robbers earlier this morning along with an exchange kiosk.
The robberies all took place in under an hour.
“I can confirm that there has been an aggravated robbery at a currency exchange centre in Östermalm, followed by two bank robberies nearby,” said Lars Byström, a spokesperson for Stockholm police.
He added that at least one suspicious package had been left behind.
“We don’t know too much right now, but we have police experts on the scene who are taking care of the object, while others are doing all they can to hunt down those responsible,” Byström said.
The robbers are understood to have got away with some money although the amount has not been specified.
Reports in Swedish newspaper Aftonbladet suggested that the robbers were armed with an axe and guns. The paper added that an automatic weapon, a kalashnikov, had been found close to a pre-school near one of the banks.
Byström said he could not confirm Aftonbladet’s information.
He sad that said police had found a moped believed to be connected to the crimes.

Police have been on the scene since 10:30am. Photo: TT
Nearby subway stations have been closed down in an effort to track down the suspects.
Nordea has also confirmed that it is dealing with the risk of a potential explosion.
“We have got information that there is a bomb threat, ” Petter Brunnberg, press spokesperson at Nordea bank told TT.
He was unable to confirm if a branch or the bank or the company’s head office was the target.
“Right now we are waiting for further instructions from police,” he added.

The dramas come less than a month after robbers attacked two other banks in the city.
In September, an exchange bureau in Gullmarsplan in southern Stockholm was robbed, while there was a failed robbery attempt at nearby Medborgarplatsen. Masked thieves fled the scenes, leaving behind ticking packages that police feared could be bombs.
Bank robberies are rare in Sweden. In the beginning of the nineties, there were over 100 per year – topped off by 153 in 1991 alone. Since then, the numbers have dropped considerably, with the exception of 2008 when there were 110 robberies. After 2008, there have been only around ten each year across the country. 2012 saw only five, a record low.