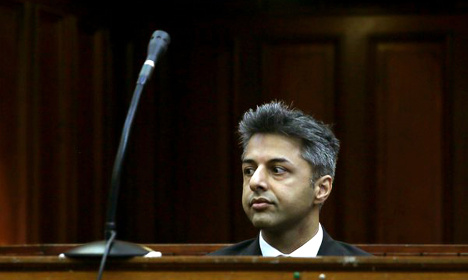 British businessman Shrien Dewani appears in the high court in Cape Town. Photo: TT
They also raised the possibility that there were plans to "sexually molest or rape" her before she was killed accidentally.
The defence appeared to be setting up an argument to explain a key question in the case — why Dewani was allowed to go free while armed hijackers drove off with his wife, who was later shot dead.
Prosecutors say Dewani had arranged to pay the men to stage a fake hijacking and execute his 28-year-old Swedish-born bride Anni on their honeymoon in Cape Town in 2010.
Prosecutor Adrian Mopp led evidence Monday that Dewani was gay, in support of the argument that the millionaire businessman wanted to end a marriage he felt pushed into by family pressures.
Dewani has admitted being a member of gay websites and having paid male prostitutes for sex, but says he is bisexual and loved Anni.
The court heard on Monday that he described himself on the Gaydar website as "gay", not "bisexual", and that he had logged onto the site within hours of Anni's death.
Dewani wept as his lawyers closely cross-examined a state witness, Mziwamadoda Qwabe, who is serving 25 years in jail for his part in the murder.
Defence lawyer Francois van Zyl said the wounds caused by a single shot to Anni's neck were not normally seen in an execution-type killing.
He suggested that bruises on Anni's leg showed that she was being held during a struggle.
"It has all the hallmarks of a shot that went off that was not supposed to go off at the time," he said, pointing out that the killing happened in a populated area.
"If a person wanted to sexually molest or rape the deceased by threatening her with a firearm, pulling her leg, that is not something one would easily do in a residential area," Van Zyl said.
He suggested the men had known that Dewani was rich and that they could demand money if they kept his wife hostage.
Asked by Judge Jeanette Traverso whether he agreed with the defence's suggestion that it was a kidnapping that had gone wrong, Qwabe replied:
"There was never anything about a ransom."
Prosecutor Mopp asked Qwabe what the primary objective was that evening, to which he replied "to kill the wife".
Qwabe has testified that he and an accomplice were promised 15,000 rand ($1,300) to kill Anni in a staged hijacking.
Dewani returned to Britain within days of her death, and fought a three-year legal battle to avoid being extradited to South Africa, claiming he
had mental health problems, including depression and post-traumatic stress.
But he was sent back in April to South Africa, where he was found fit to stand trial.