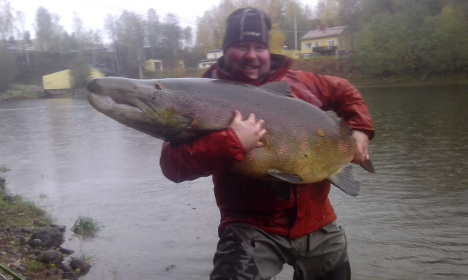 The salmon weighed 25 kilogrammes. Photo: Tobias Jansson/TT
Magnus Fagerström from Bergsjö on the east coast of Sweden may have made the catch of the year.
While fly-fishing in the Ljungan river he felt a massive bite on the end of his line.
He told local media that it felt like he'd hooked a small car.

The 127-centimetre fish. Photo: Tobias Jansson/TT
What followed was a forty minute battle with the monster of the deep, ending up with the Swede holding a 127-centimetre salmon in his arms.
"It felt great, but it was more of a 'bonus' fish, we were actually fishing for sea trout," Fagerström told The Local afterwards.
Local fishing rules mean the fish won't end up on the dinner table either.
"The first thing on my mind when I pulled it up was that it was going back in again. Laws and regulations are there to be followed. There's no question about it, but first we wanted to snap some pictures," he explained.
Salmon has been a protected species in the Ljungan river since September 1st.
Fagerström explained that while he was able to measure the fish's length, his scales only could manage up to ten kilogrammes, so he was left to simply estimate the weight of the fish.
While the fisherman's friends may think the salmon is the biggest to be plucked from Swedish waters, German fisherman Uwe Lehrer (below) would disagree. In 2011, he snagged a 29 kilo salmon in the Bergeforsen river.
"It was very exhausting," he told The Local at the time.