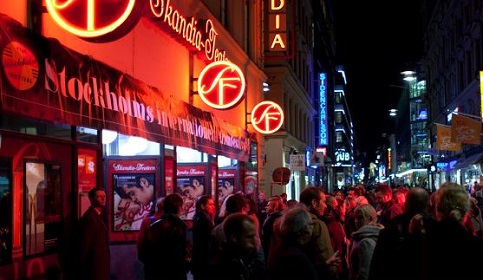 Each year the Stockholm Film Festival spotlights a certain theme. This year, it's hope – all across the globe.

"In our spotlight section we will present films where hope is the driving force of change," festival director Git Scheynius explained. "It's a stormy journey across the world, from Iran to Sudan to Hungary to Brazil."

This years festival will offer 201 films from 60 countries. #sff14

The festival takes place between November 5th and 16th, and tickets were released on October 14th.

The SI News Service picked out ten of the most interesting films, both fact and fiction, based on and inspired by conflicts – and hope – throughout the world.

After featuring at the Sundance Film Festival in the US, this dramatic documentary is coming to Stockholm. Set in the Israeli-Palestinian conflict, "The Green Prince" follows a 17-year old Palestinian who is imprisoned and later agrees to spy for Israel. The documentary is based on the memoirs of the boy himself: Mosab Hasan Yousef, who wrote "Son of Hamas".

Filled with terror, torture, trust, betrayal, intrigue, and drama, "The Green Prince" is not just about a conflict – it's about people, the journeys they take, and the changes they make.

Another compelling contribution from Israel, "Self Made" is another powerful film about Israeli-Palestinian tensions – this time from a woman's perspective.

It's the story of two women, one on each "side" of the conflict. The two get mixed up at a checkpoint – and are forced to start new lives with the "enemy", discovering themselves along the way.

Entirely without dialogue or even subtitles, "The Tribe" is truly one of the festival's most unique films. The story takes place at a school for the deaf in Ukraine – and is entirely in sign language.

"It's remarkable that Ukraine, which can barely stand on its legs right now, has created one of the festival's strongest pieces,"  festival director Git Scheynius said of the film.

A new student arrives at the school and is quickly drawn into a gang involved with drugs and prostitution. But the film is also filled with love, tenderness, and pure, raw emotion.

Tales of Somalian pirates keep reaching international news – but what's their side of the story?

"Fishing Without Nets" is the powerful story of Abdi, a fisherman who resorts to extremes when the family business is no longer enough to get by on.

An American woman takes in four young Sudanese refugees – and that's when the drama of resettlement and integration begins.

"The Good Lie" is based on the true story of thousands of refugees fleeing civil war. Several of the actors themselves were child soldiers in Sudan, and this remarkable film provides a striking glimpse into the life of refugees.

A young Iranian couple plans to move to Melbourne, Australia – but the night before the journey, they are involved in a tragic accident which changes everything.

The film received standing ovation at the Venice Film Festival, and featured prominently at Cannes. Now it is finally arriving to Stockholm.

Yet another documentary, "Captive Hearts" shows a day in the lives of Brazilian women who sit waiting to be reunited with their imprisoned husbands.

Their relationships consist mainly of letters, memories, and longing. And many of the women seem to idealize their relationships, forgetting just how criminal and violent their partners are…leading one to wonder what will happen when the bars are finally removed.

As he gets to know poor farmers in the area he grows more passionate, and his interest for explosives keeps growing.


Morocco/Qatar: The Narrow Frame of Midnight

Zacaria, a Morroccan-Iraqui writer, takes off to look for his missing brother who has become a victim of Jihad extremists. Meanwhile a homeless little girl finds her way to Zacaria's former mistress.

Through war, hardship, and injustice, these people are drawn to one another – and find hope.

This powerful Bengali film shows the struggle of a young couple struggling to get by during the economic crisis.

Times get tougher and tougher, and they become isolated through their impossible work hours.

Want to know more about the Stockholm Film Festival? See the full list of films here.