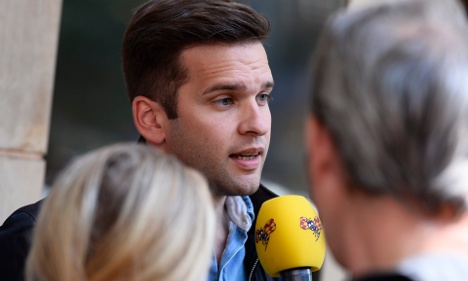 Gabriel Wikström is one of Sweden's youngest politicians. Photo: TT

Gabriel Wikström, 29, is currently being flooded with messages from teenagers in Turkey and around Europe, declaring their love for the politician and dubbing him 'The Handsome Minister'.

The Twitter storm is understood to have started on Sunday after one user tweeted out his photo.
"I can’t feel anything but honored and glad. And a little bit surprised, I must admit. Hopefully I can be a role model and inspire young people in Turkey to get involved in politics," he told The Local.

Gabriel Wikström has been dubbed Sweden's 'Handsome Minister'. Photo: TT
Previously a local councillor in Västerås, Wikström led his party's youth organization from 2011 until becoming a minister.
After the initial interest in his Twitter profile, following his new appointment, he enlisted the help of Sweden's new City Planning and Environment Minister Mehmet Kaplan to write a tweet back to his foreign fans.
“Welcome to my followers from Turkey and thank you,” he posted.

Wikström's Turkish message led to thousands of others following and tweeting about him.

He told Sweden's Aftonbladet newspaper he thought the fact that he was "fairly young" and had been chosen to sit in the Swedish government was the main reason he was getting so much attention.

He told The Local that he still hadn't been in contact with the person who started the trend for sharing his photo and said that the Twitter user's identity remained unclear.

"We’ve been trying to determine that but haven’t quite succeeded. It’s all a bit of a mystery for us."

His personal life also remains a mystery. His press team did not respond to questions from The Local about whether or not he was single.

Ten other new minister faces you should know about

Wikström says his key goals in government are making sure "all Swedes are able to get cutting-edge health care on equal terms" and increasing "the possibilities for children and young people to participate in sports activities".
The politician has also said he will write more tweets in Turkish and English from his account, which he manages himself.

Earlier on Wednesday, he posted that he had met with Hans Rosling, who is Professor of Global Health at the Karolinska Institute in Stockholm, to discuss the Ebola crisis.