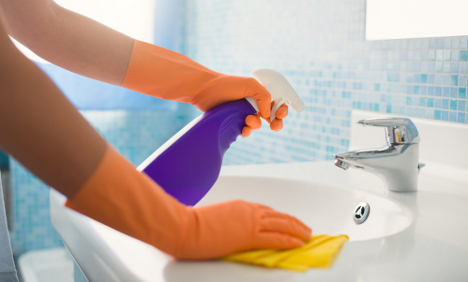 In 2014 around half a million people regularly hire cleaners in Sweden, compared to 90,000 seven years ago, according to statistics from Skatteverket, Sweden's Tax Agency.

Many Swedes warmed up to the idea after tax breaks for families hiring household staff were introduced in 2007, designed to discourage undeclared or illegal domestic work.

Now, a cluster of businesses that allow customers to book and pay for services online are further encouraging people to buy in home help.

Helpling is the latest start-up to enter the market. Initially launched in Germany, it bills itself not as a cleaning company but rather a market place that connects professional self-employed domestic cleaners and potential online customers.

Customers can go online and select a date and time, before paying in advance by credit card or PayPal. It takes just minutes to set up an appointment and no home visits prior to the scheduled time are required.

A Helpling worker in Berlin, where the company first launched. Photo: Helpling

Nordic Manager Lise Rechsteiner explains that Sweden was an obvious choice as the business expanded because the cash-in-hand black market here is already small in comparison to other countries.

“That’s attractive, it’s hard to compete with the black market,” she says.

Alluding to the success of Swedish start-ups like Skype and Spotify, she adds that Swedes are no strangers to creating and making use of online platforms.

“I think there’s been a major shift in Scandinavia. People are looking at cleaning services in the same way as other kinds of services," she tells The Local.

She says people are starting to think of booking a cleaner in the same way as organizing a babysitter or scheduling a haircut.

Since Helpling launched earlier this year, its workers have already cleaned thousands of Swedish homes.

The company builds on the success of larger rival companies such as Hemfrid and Homemaid, which have been around since the 1990s and are also experiencing growing demand. Helpling customers can book cleaners via an app. Photo: Helpling

Sweden's trend in domestic help use has also been observed by Elin Kvist, a senior lecturer at the Department of Sociology at Umeå university, who has studied domestic service reform.

“It’s a cultural change. Because of the tax deduction the practice is becoming more frequent, and because of that, culturally accepted,” she tells The Local.

“What I can see as a sociologist is that we’re dealing with a society with increasing gaps in work opportunities. The market generates a clientele that can afford to buy services and it creates a group of people who are prepared to execute these services,” she adds.

One such customer is Henrik Dyrsse, a 28-year-old consultant living in central Stockholm.

“In a certain world you could say it’s typical to use a cleaning service. A lot of my colleagues and friends have cleaners, basically because we work a lot,” he tells The Local.

He says no one has ever raised an eyebrow at his decision, but he accepts that not everyone shares his attitude towards hiring a cleaner.

“Some still think it’s snobbish. But the general opinion is changing,” he argues.