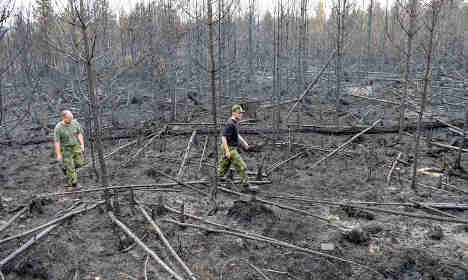 The fire scorched central Sweden for two weeks in August. Photo: TT
"This is becoming a very big problem, so we've decided to hire security guards for the residents," Åke Jacobsson from the local Västmanland council told Swedish broadcaster SVT.
He added that each weekend the guards have had to caution over 100 people who were either trespassing or infringing on residents' privacy.
The sightseers, or the "fire tourists" as the Swedish media has referred to them, spend their weekends exploring the scene of the fire and taking pictures of the charred remains and torched houses.
One resident, Marie Nyberg, said she felt like "a monkey in a cage" with all the attention from curious visitors.
See more pictures from the forest fire

Helicopters fought to quell the blaze. Photo: TT
"From what I can understand, people are heading out to take a look as if it's some kind of attraction," she told SVT.
"They go out with their cameras and mobile phones. There are still loads of cars, thousands even."
SVT's reporter on the scene said the fire left the area looking like a "lunar landscape". Reports at the time showed that up to 100 square kilometres of forest had burnt, in a fire that raged through central Sweden for two weeks in August before it was under control.
One person was killed in the blaze and another left critically injured. Authorities were forced to call in the help of French and Italian water bombing planes to help quell the blaze.
Across central Sweden, thousands of homes were evacuated, including that of Englishman Andrew Wooten.
"I packed three photos of my three kids and some binders full of paperwork," he told The Local at the time. "It's tough. You just think: 'Crumbs, there's so much to take but it's not really important'," he explained. One of the water bombing planes sent in from abroad. Photo: TT