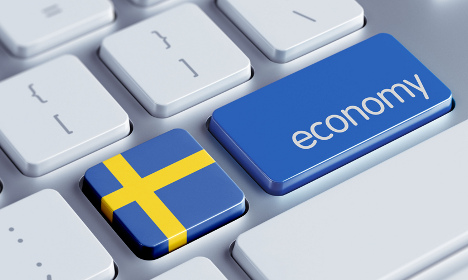 Sweden's economy is growing slowly. Photo: Shutterstock
Sweden's Fiscal Policy Council has released a statement criticizing some of the strategies announced by Social Democrat Finance Minister Magdalena Andersson on Monday.
It also contradicts her assessment that the outgoing centre-right coalition left a "large hole" in Sweden's finances.
The agency concludes that Sweden's fiscal policy (how it raises money and spends taxes) was "largely balanced" during the previous government's time in power.
"In the light of the long recession, we believe that the public finances are in good condition, especially compared to other countries," read the statement.
Fiscal Policy Council Secretary Joakim Sonnegård told The Local that the agency was concerned about the Finance Minister's budgetary plans moving forward.
In Sweden, most parties agree that at the end of each year or business cycle, the government should have a one percent budget surplus. In other words, it should have some money left over that it hasn't spent on providing public services or other government matters.
But on Monday, Finance Minister Madgalena Andersson, forecast that a surplus would not be possible in the next four years.
"This is fine at the moment or for the next year or so, because we are coming out of a recession," said Sonnegård.
"But in the longer term, she has made an assessment that Sweden's economy can return to normal by 2017 or 2018 and we should aiming to do this with a budget surplus. We don't need to deviate from Sweden's previous plans."
Sonnegård added that Andersson's strategy would not cause any immediate dangers for people living in Sweden, but could affect the confidence that global markets, other governments and consumers have in the government's fiscal policy.
"If she deviates from the rules and behaviour we usually have here, this could create a distrust and be problematic in the long run," he said.
Sweden's new Social Democrat-led coalition has argued that its budget will ensure improved public services and healthcare in Sweden alongside better education and training, especially for young people.
It has also promised to create new jobs by launching construction programmes that are also designed to tackle the country's housing crisis.
Madgalena who? Read more about Sweden's Finance Minister and the rest of Stefan Löfven's top team