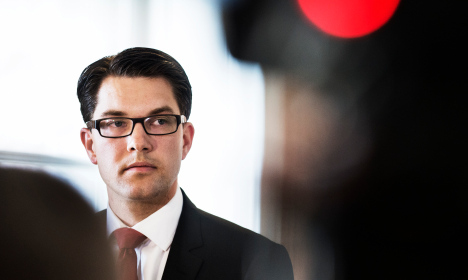 The European elections saw record numbers of people voting for nationalist parties including Jimme Åkesson's Sweden Democrats, which was among the seven founding members of the Europe of Freedom and Direct Democracy (EFDD).

But the EFDD disintegrated on Thursday after a Latvian member pulled out, ending the short-lived alliance between Europe's Eurosceptic parties.

The group was set up by British Eurosceptic politician Nigel Farage and the populist Five Star Movement of Italian comedian Beppe Grillo, following May's elections to the European Parliament.

Most MEPs belong to a cross-country political group and the emergence of the EFDD in 2014 was seen as a sign that nationalist parties could have a growing influence across the 28 country bloc.

Seven is the minimum number of parties required to form a group in the European Parliament.

As The Local reported in June, Ukip leader Nigel Farage's decision to admit the Sweden Democrats (SD) into its European parliament group helped to give the party with fascist roots greater credibility and acceptance.

"For SD it is another step in the process of institutionalizing themselves and becoming a member of an established EU-critical group," Ann-Cathrine Jungar, a political scientist at Stockholm's Södertörn University, told The Local at the time.

Now that the EFDD has collapsed, the position and influence of the Sweden Democrats within the European Parliament remains uncertain.

Sweden Democrats' press spokesman Martin Kinnunen told The Local that neither European politician would be commenting on the development on Thursday.

"Jimmie Åkesson made our position very clear after the elections in May. We most want to work with Ukip and with the Danish People's Party. Our position hasn't changed".

In a separate statement, the party said:

"We will have to be patient now before we draw any conclusions or form any plans. Now is the time to evaluate what has happened".

The main centre-right group in the Brussels parliament, the European People's Party, has celebrated the collapse of the EFDD on Twitter.