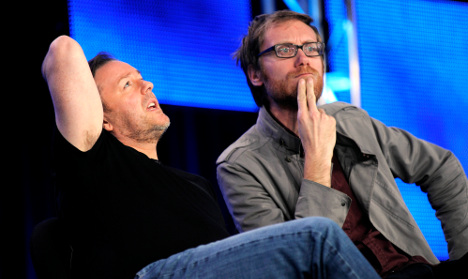 Stephen Merchant (right) wrote The Office with Ricky Gervais left. Photo: TT
It's a big week for comedy in Sweden, with the launch of the new Stand-Up for Stockholm festival.
Headlining the gigs – which run until the 25th – will be comedy genius Stephen Merchant on Saturday night. If you're not sure who Merchant is, he's the British brains behind The Office, Extras, and An Idiot Abroad, best known for being the tall and lanky sidekick to Ricky Gervais.
The festival will also see names like Lead Balloon star Jack Dee, Whitney Cummings, and Reginald D Hunter – not to mention a host of familiar Swedish acts. Find out more here.

Jack Dee. Photo: Off The Kerb Productions.
Comedy not your thing?
Never fear, there's the Uppsala Short Film Festival just 40 minutes north of the capital. This annual event will see over 300 films in four different cinemas over six days (from October 20th to 26th). Check out the full details here.
More into Jazz? Of course you are, and that's ok – we have you covered too. Head north to Umeå where the town's Jazz Festival will kick off on Wednesday and run until Saturday. Guest of honour will be Mats Öberg (pictured below), who played together with Frank Zappa back in the late eighties. International and other Swedish artists will be on the scene, plus workshops and seminars for those who prefer to blow their own horn.

You can find plenty more ideas of things to see and do in Sweden by clicking through our calendar below.