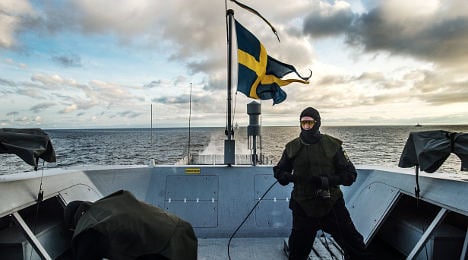 Naval staff aboard the HMS Visby, which took part in planned exercises on Friday and is likely to participate in the submarine hunt. Photo: Yvonne Åsell/SvD/TT

Swedish signals intelligence officials first heard an emergency call on Thursday evening, the newspaper said. Fourteen hours later, at around midday on Friday, a foreign vessel was spotted in the Stockholm archipelago.

Sweden intercepted further communications after it began its military operation in the waters off Stockholm, as encrypted messages were relayed between transmitters in the Stockholm archipelago and the Russian enclave Kaliningrad, SvD said.

The Swedish military said it could neither confirm nor deny the report.

An underwater craft in distress can be difficult to manoeuvre, which might explain why it was spotted above the waterline, the newspaper said.

A damaged submarine would need help from a support vessel, SvD said, adding that a Russian-owned oil tanker, the NS Concord, had been observed circling in international waters near Stockholm.

The picture in the tweet below shows the ship's movements so far in October.

“We are aware of the vessel and have an eye on it,” Svenska Dagbladet quoted one of its sources as saying.

Sweden's military deployed planes and ships in the Stockholm archipelago on Friday in response to what it described as "foreign underwater activity".

The operation went on all night and continued throughout Saturday.

"This will continue until we consider that we are done," Jesper Tengroth, press officer for the Swedish military, told the TT news agency on Saturday.

He added: "We are now trying to verify the information we received yesterday, which in our assessment comes from trustworthy sources, and see whether it has any substance or not."

When asked if there were any new observations throughout the course of the night, Tengroth said, "Not that I know." He added that the size of the operation remained unchanged.

Defence Minister Peter Hultqvist said he was receiving regular updates from the Armed Forces, who had informed him the operation, involving around 200 troops, was "necessary and well-founded".

"I have full trust in their judgement," the TT news agency quoted him as saying on Friday.

In a statement on their website, the Armed Forces said a “credible source” had provided the information behind the announcement, which prompted a counter-intelligence operation in the area.

“We have support for the analysis work we are now carrying out in the area in the form of ships, planes and territorial army personnel. The area is heavily trafficked, which is why it’s important for us to go public with information about what we’re doing,” said Jonas Wikström, commanding officer of the operation, according to the website.

Wikström spoke only of foreign underwater activity, without specifying submarines.

Svenska Dagbladet reported that the sighting was at an island in Kanholmsfjärden, an inlet located just over 50 kilometres (30 miles) from the city centre.

A witness to the start of the military operation, Robert Eriksson, said he was out in a boat fishing off the island of Skarpö at around 4pm.

"The coast guard came in over the inlet with an airplane and flew round and round for a long time," he told news agency TT.

Soon the navy also showed up.

"There was a large military boat that stayed further south on Kanholmsfjärden," he said.

Stefan Ring, a military strategy expert at the Swedish National Defence College (Försvarshögskolan) said it was important to send a signal.

"It's important in this kind of situation, when we're noticing an escalation in the Baltic Sea, to signal very clearly that we're on top of the situation," he said.

"If one were not to do anything and it turned out to actually be something, then that's a signal to an opponent that this isn't all that important to us."

Ring was however also keen to avoid connecting the incident to Russia, saying too little was known for now to allow an in-depth analysis. In recent months, Sweden has seen an uptick in Baltic Sea manoeuvres by the Russian air force — including an incident in September when two SU24 fighter-bombers allegedly entered Swedish airspace in what then Foreign Minister Carl Bildt called "the most serious aerial incursion by the Russians" in almost a decade.

Sweden lodged a formal protest after the alleged incursion.

"As the government has said, the situation has deteriorated in the Baltic Sea," Wikström said on Friday.

Russian submarine activity around Sweden became a major cause of concern during the Cold War. The most famous of these was the submarine U137 which ran aground in a secret Swedish submarine lane in Blekinge, southern Sweden, in 1981, causing a major diplomatic crisis.