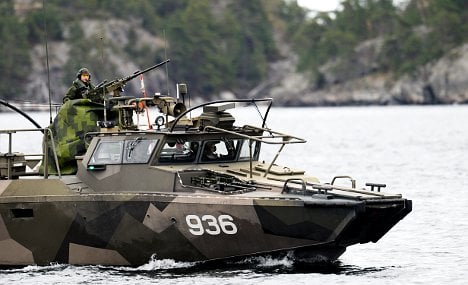 A Swedish military vessel takes part in the operation launched in the wake of suspected "foreign underwater activity" near Stockholm. Photo: Pontus Lundahl/Scanpix

More than 200 troops, Swedish stealth ships, minesweepers and helicopters have been searching an area of the Baltic Sea about 50 kilometres  east of the Swedish capital since Friday evening, following a tip-off from what the military called a "credible source".

"I have decided to increase the number of units in the area — units with specialized sensors," Commander Jonas Wikström told reporters at a press conference in Stockholm.

"We still judge that the information we received yesterday was very trustworthy," he added, but declined to comment on what the military had discovered after more than 24 hours sweeping the sea around islands in Stockholm's archipelago.

Swedish defence analysts cited by local media speculated that a foreign submarine may have been in the area to replace old spy equipment or to monitor a Swedish naval exercise.

Wikström declined to give details of the reinforcements to the "intelligence gathering" operation as they could provide information to "a potential opponent on how and where we are working" if there is ongoing "underwater activity".

Sweden's new Social Democrat Defence Minister Peter Hultqvist — who took office just a fortnight ago — refused to comment on the military operation but told the daily Svenska Dagbladet that his government would be more open about military incursions in the Baltic than its centre-right predecessor.

"What's been happening in the Baltic Sea, including airspace incursions, shows that we have a new, changed situation," he told the newspaper.

"Russia has made enormous military investments… with their increased strength they are training more, and that influences the security environment."

Svenska Dagbladet said the sighting was at an island in Kanholmsfjärden, an inlet located just over 50 kilometres from the city centre.

In recent months, Sweden has seen an uptick in Baltic Sea manoeuvres by the Russian air force. In one incident in September, two SU-24 fighter-bombers allegedly entered Swedish airspace in what Foreign Minister Carl Bildt at the time called "the most serious aerial incursion by the Russians" in almost a decade.

During the 1980s and early 90s the then-neutral — and now non-aligned — country was regularly on alert following Russian submarine sightings, including one notable case in 1981 when a Soviet U-boat ran aground several miles from one of Sweden's largest naval base.

SEE ALSO: Russian 'plans for war on Sweden' cause concern