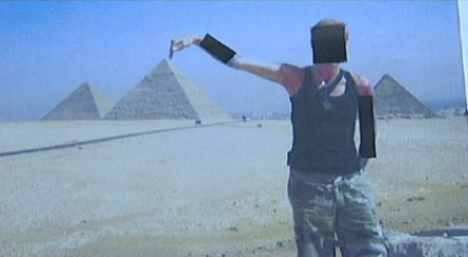 The fraudster was pictured on holiday in Egypt without his wheelchair. Screenshot: SVT

Lars Wallin, dubbed 'Wheelchair man' by the Swedish media, made headlines after pictures emerged of him on holiday in Egypt – without his wheelchair. Swedish police obtained snaps of Wallin riding on camels, smoking a hookah pipe and climbing the pyramids during his 2009 holiday.

He had been convicted in December 2011 for scamming the Social Insurance Agency (Försäkringskassan) out of millions. Wallin, 50, was sentenced to four years behind bars but failed to show to begin serving his sentence in 2013.

Police at the time were convinced he fled the country and a manhunt commenced. Wallin is believed to have networked across Africa and South America to avoid escape in a case that also involved Interpol.

The fraudster's bid to stay out of jail was ground to a halt after being picked up in Brazil earlier this week.

"It's true that he was arrested in Brazil on October 15th. The Brazilian authorities arrested him after a request from the National Swedish Prisons and Probation Administration (Kriminalvårdsstyrelsen). But I have no details on how the arrest happened" Sara Kvarnström, press secretary of the National Police Board told the Linköping based Corren newspaper.

Following a car accident in 2001 the man claimed, supported by a doctor's note, to be in such bad condition that he couldn't even dress himself, but his fraud came to an end when suspicions were raised after police managed to film the man while gardening by his summer house on Gotland.

For six years his two brothers and his girlfriend, who he claimed to be his around-the-clock personal care assistants, were funded by the agency and Linköping municipality. They were also given a prison sentence.

"Of course it is with satisfaction that I can verify that now he can serve his sentence. It isn't fair that a person sentenced to prison for a long time can manage to stay away," said prosecutor Eva Kokkonen to Corren.

Wallin is currently in the Swedish embassy in Brasilia where he is receiving legal aid. He is due to be extradited back to Sweden to serve his sentence, which he was due to begin in August 2013.