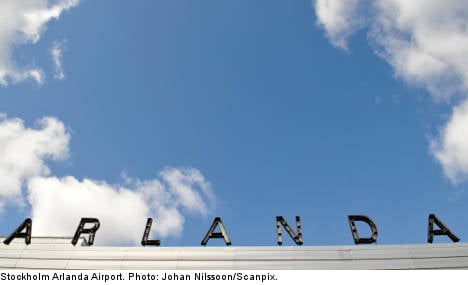 The man landed at the airport on Sunday afternoon showing symptoms often associated with Ebola. It is understood that the man is not from one of the affected countries encountering the epidemic, which has claimed almost 5,000 lives.

Newspaper Aftonbladet reported that the man had flown to Sweden from the Middle East.

"The person vomited, was out of sorts and felt bad. Nobody concerned with the present situation can classify it as Ebola; it could be anything. But it is better to be safe than sorry," Ulf Wallin, Swedavia's press officer told Aftonbladet.

The patient has since been transferred to an isolation unit at Karolinska University where he will be examined by medics.

Helena Hervius Askling, a Stockholm infectious disease specialist, said on Sunday evening it was too early to classify the patient as a potential carrier of Ebola.

"Not until the person has been examined can we say if it's a suspected case or not," she told news agency TT.

Doctors had taken the extra precaution of placing the patient in isolation in view of the ongoing outbreak in western Africa.