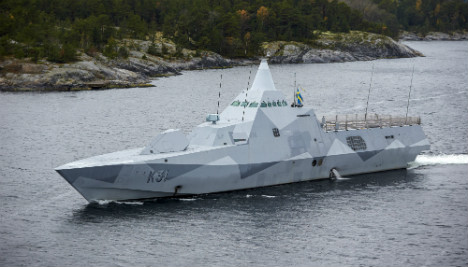 Late on Saturday, Swedish armed forces stepped up an operation — involving more than 200 men, stealth ships, minesweepers and helicopters — in an area about 50 kilometres (30 miles) east of the Swedish capital.

The operation was initiated on Friday after the armed forces said they had been informed of a "man made object" in the water.

Officials denied they were "submarine hunting," calling the mobilization — one of the biggest, barring purely training exercises, since the Cold War — an "intelligence operation".

Russia also denied on Sunday that any of its submarines were involved.

"There have been no irregular situations and, even less so, accidents involving Russian naval vessels," the Russian defence ministry said in a statement.

But the respected Swedish daily Svenska Dagbladet reported that a damaged Russian submarine was at the centre of the mystery.

The report said that Swedish military intelligence had intercepted radio signals between an area off the coast of Stockholm and the Russian exclave of Kaliningrad — home to much of Russia's Baltic Sea naval fleet. "It was transmitted on a special frequency, used by Russia in emergency situations," the newspaper wrote, citing Swedish military sources involved in the search.

Sweden's armed forces remained tight-lipped, but did say its focus was on "underwater activities."

"The Swedish Armed Forces are not in a position to deny or verify media news or speculations recently published about a missing foreign submarine," spokesman Erik Lagersten said.

"At the moment we are conducting an intelligence operation in the archipelago of Stockholm with optical reconnaissance as well as with naval vessels equipped with qualified underwater sensors… to establish if there are or has been foreign underwater activities in the area."

Anonymous military sources told Svenska Dagbladet that the emergency signal in Russian was intercepted on Thursday evening, and that further encrypted signals were sent on Friday after Swedish armed forces began combing the area.

In August 2000 the Kursk, a Russian nuclear submarine, sank in the Barents Sea killing the entire crew of 118. Russian authorities were later criticised for refusing international assistance and for misleading the public about the pace of their failed rescue operation.

In recent months, Sweden has seen an uptick in Baltic Sea manoeuvres by the Russian air force. In one incident in September, two SU-24 fighter-bombers allegedly entered Swedish airspace in what then Foreign Minister Carl Bildt at the time called "the most serious aerial incursion by the Russians" in almost a decade.

During the 1980s and early 90s the then-neutral — and now non-aligned — Nordic country was regularly on alert following Russian submarine sightings, including one notable case in 1981 when a Soviet U-boat ran aground several miles from one of Sweden's largest naval base.